Imperial Edition for The Elder Scrolls® Online and Online Store!

Imperial Edition for The Elder Scrolls® Online and Online Store!
Originally Published and Copyrighted by Blast Away the Game Review on 1/30/2014
Written by Dustin Murphy 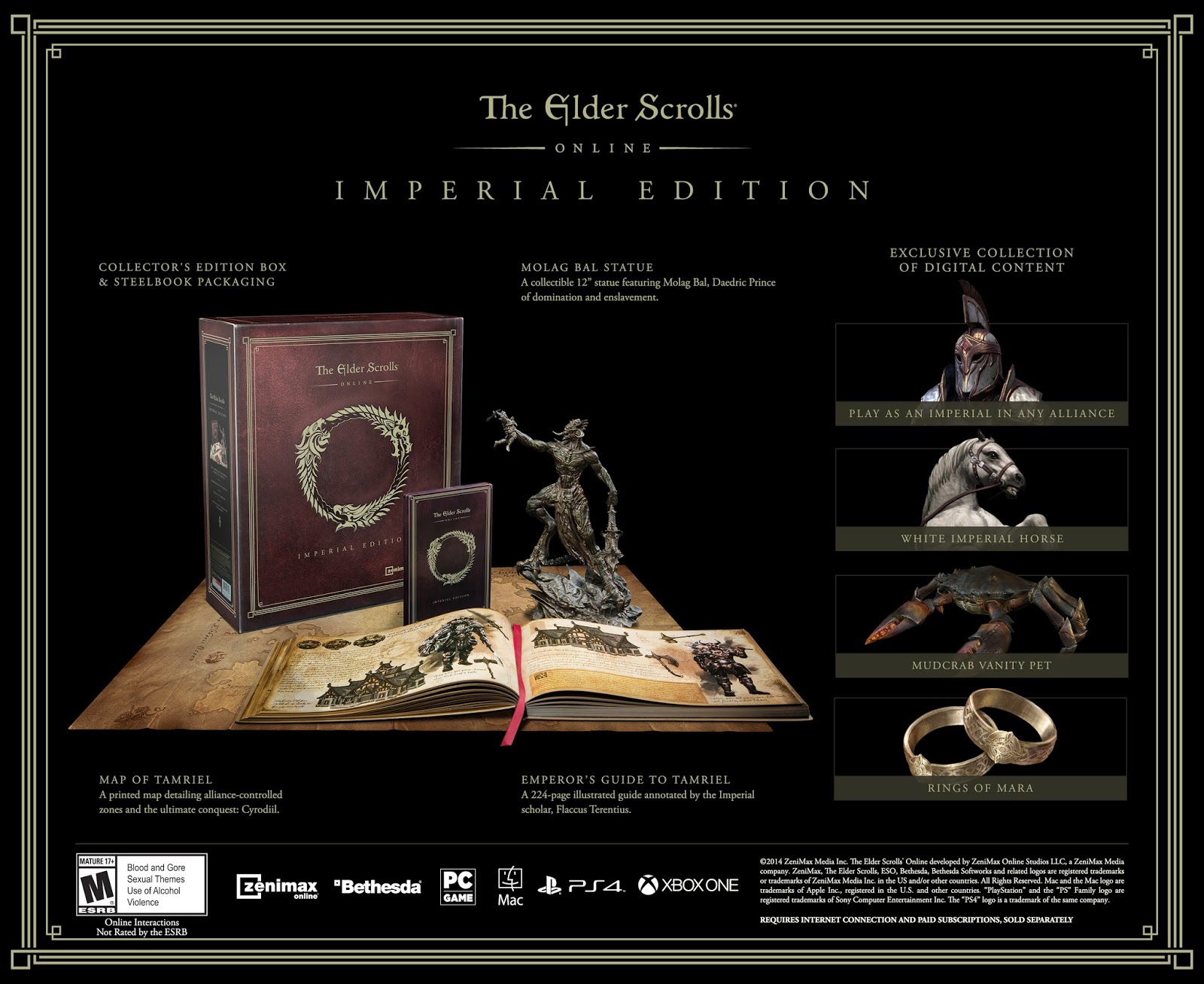 The Elder Scrolls Online Digital Imperial Edition includes the base game and all digital content outlined for the Physical Imperial Edition above and retails for $79.99. Downside? No physical stuff, which is nice stuff to have. Read below for the rest of the information that has been provided by Bethesda/Zenimax regarding this product Quite a bit still to go!

All those who pre-order or pre-purchase either the Imperial Edition or the Standard Edition in physical or digital formats will also receive The Explorer’s Pack bonus at launch, which includes: Scuttler vanity pet, four bonus treasure maps, and the ability to play as any of the nine races in any Alliance.

The Elder Scrolls Online, developed by ZeniMax Online Studios, is the latest chapter of the award-winning franchise and will bring the legendary experience online for the first time. Players can choose their own style of play as they embark upon an epic adventure across all of Tamriel, playing alone on heroic quests as in previous Elder Scrolls games, exploring the huge, rich world with a few friends, or joining with hundreds of others in massive PvP battles to save the Empire.

The Elder Scrolls® Online will be available worldwide on April 4, 2014 for PC and Mac users. Versions for the PlayStation®4 system and the Xbox One® will be arriving on retail shelves in June 2014.


The Elder Scrolls Online has been rated M for Mature by the ESRB.

About Bethesda Softworks
Bethesda Softworks, part of the ZeniMax Media Inc. family of companies, is a worldwide publisher of interactive entertainment software. Titles featured under the Bethesda label include such blockbuster franchises as The Elder Scrolls®, DOOM®, QUAKE®, Fallout®, Wolfenstein®, Dishonored®, Prey® and RAGE®. For more information on Bethesda Softworks’ products, visit www.bethsoft.com.