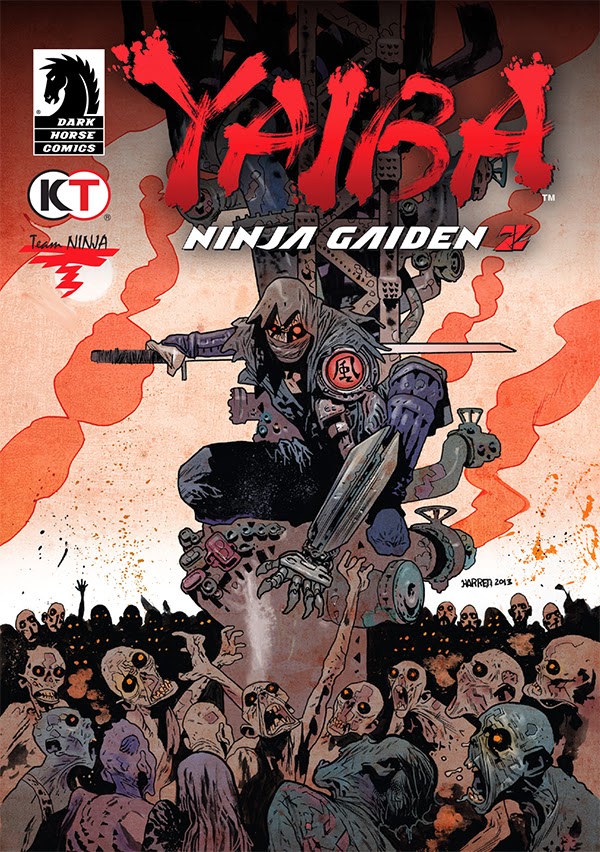 Notice: Check out Blast Away the Game Review for the full gallery for the first three pages.
Interested in Yaiba: Ninja Gaiden Z like many others? Want to know a bit of how it started? You're in luck. Earlier today Team NINJA and Dark Horse Comics has announced that they are have started up a three part Yaiba: Ninja Gaiden Z series, which will provide a backstory behind the events that lead up to the launching title. Yaiba will take a break from his day job of slaughtering countless hordes of zombies in the entry comic to tell a tale of his sword's history so that it could become known as "Heartless" as he recounts the origin story of Miss Monday. Interested still? Initially releasing as a digital title, the comic will release beside the game, allowing for a hands on impression of it as a physical release.

Wanting a release date? Don't hold your breath too much longer, we'll be seeing it here in North America on March 18th of this year. the series is brought to life by Writers Tim Seeley and Josh Emmons, Arist Rafael Ortiz, Colorist Carlos Badilla with special cover art by James Harren. The comic will be available for free as a download over at www.digital.darkhorse.com, as well as through the Dark Horse Comics app (available through both iTunes & Google Play). Additional information can be found over at this ?URL: https://digital.darkhorse.com/profile/4128.yaiba-ninja-gaiden-z-1/

Original Information about the upcoming title:
In YAIBA: NINJA GAIDEN Z, players will battle fierce zombies as Yaiba, a cyborg ninja who will do anything to get revenge and stay alive. Cleaved in two, he is brought back to life with cyber-technology. Brandishing his ninja sword and the mecha weapons in his cyber arm, he slaughters zombies with brutal, over-the-top abandon. Step into a stylized living comic book where stunning graphics depict a world gone mad. Hordes of undead can only be stopped by Yaiba’s willingness to use any means necessary to get the job done. Will he kill by turning his cyber arm into a razor chainsaw for slicing up undead—or just rip off an opponent’s arms to use as zombie nunchucks? Both possibilities fill Yaiba’s heart with twisted laughter in this collaboration between famed developers Team NINJA and comcept’s Keiji Inafune.

More information about YAIBA: NINJA GAIDEN Z can be found at www.YaibaNGZ.com, on Facebook at: www.facebook.com/YaibaNinjaGaidenZ and Twitter: https://twitter.com/YaibaNGZ.