Today Gearbox Software announced on their official site (here) that Borderlands 2 will be seeing a raise in difficulty once more. In the new DLC named Ultimate Vault Hunter Pack 2: Digistruct Peak, players will once more find themselves on a trip through the hilariously and psychotic trip that is Borderlands 2. In the new DLC players will find new content such as a new level cap at 72, new area, new loot, and more. With the announcement of the new content it also brings in excitement for players that haven't dusted off their copy in a while, get together and once more find themselves raising as much chaos as possible on Pandora.

Players will also find themselves excited to find new Legendary class mods, new Pearlescent-grade weapons, new character skins, new character heads, and of course the new level cap as mentioned in before. Was it also mentioned that new harder, more powerful, and of course crazed enemies wanting only one thing, to kill you will also be involved? With the new DLC players will get to fight the new Overpowered enemies, who have a higher chance to drop rare loot. Players will also enjoy the ability of gaining a new talent point per level while taking on the new area. 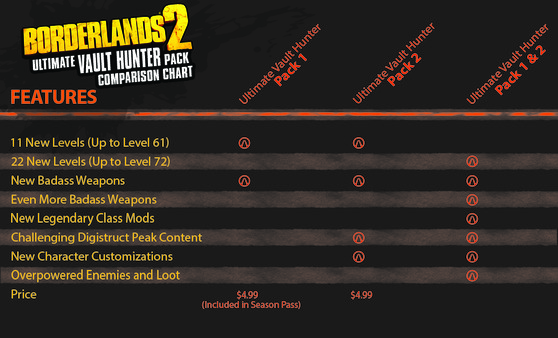 After hitting the new level cap of 72, players who have completed the content can enter into the new mode exclusive to the DLC called, Overpower. According to a interview on the official Digital Trends coverage of the upcoming content, the new area has been balanced for four player cooperative mode, and will also be quite normal. However, once all four players have progressed through the arena, they will see tougher, more aggressive, and even harder to beat enemies. These enemies of course will be based on the overall Overpower level that players have earned, starting out at Overpower level one and will change as players earn a higher Overpower rating. Even at the new level cap players will find themselves testing out their luck with the new Overpower system that has been activated.
According to the article on Digital Trends, once level capped and players have completed the arena, they then can leave the area, re-host their game, and then be prompted by the game to choose at what Overpower rating they would like to play the game at. Once players have selected their difficulty of choice they game will adjust the game to that Overpower rating where enemies will become more difficulty and of course will drop better loot. At the hardest levels players at the level cap of 72 can raise the max level to 80. The level 80 Overpower rating will pit players u against enemies exceeding level 80, the gear of course that drops will be rated at level 80, however thanks to the system in play, level 72 characters will be able to use the equipment. For the full coverage of the Digital Trends article, click here.

Borderlands 2's DLC, Ultimate Vault Hunter Pack 2: Digistruct Peak will be available on September 3rd for a cheap price of 4.99 USD. Owners of the season pass will not see this as a benefit to their season pass as it seems the usefulness of the season pass has run its course. Borderlands 2 is available for PS3 and XBox 360 fo 19.99 USD to 29.99 USD new at most major retailers online and in-store. For buyers looking at the PC version, prices may vary.
Posted by Unknown at 5:17 PM