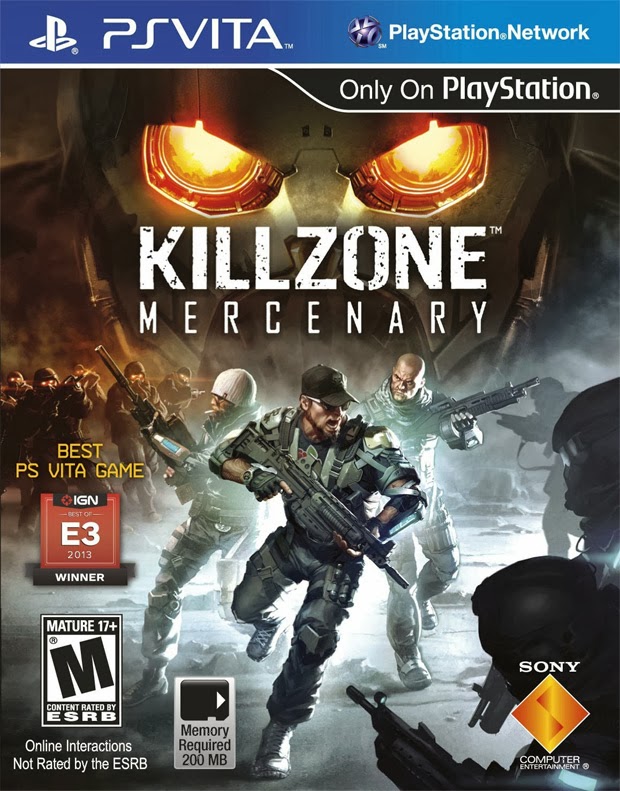 Final Opinion: When it comes to Killzone and storytelling, Guerrilla Games is no stranger to what it takes to make a game that will absolutely capture you, and this one is no exception. With a triple a title type experience on a handheld, this is a game PS Vita owners must have, it's strong in performance and graphics. It's something the Vita needed desperately and it was delivered on a silver platter.

When it comes to the Killzone franchise, I'm a long time fan of the series, and with it comes good foundation to such. Killzone as many who have experienced it knows, is a very well scripted story, a strong first person shooter, and of course filled with cutscenes, narrative, and battlefield chatter that comes in and out. Killzone Mercenary is not an exception to any changes, and that is something well deserved for any Killzone title, and with it comes another big experience on a small screen. Having seen a handheld before, Killzone Liberation was Guerrilla Games' first attempt at bringing us a handheld experience like no other, and in many ways it was a sloppy birds eye view mess. However, with it we had an expanded story, something that tied a few holes that were left over from Killzone and the transition up to Killzone 2. With Killzone Mercenary we do not see any hole patching, or even plot holes that could cause some problems for people wanting a complete story. Killzone Mercenary in many ways is a side story to the events from Killzone 2 and Killzone 3, giving players an entire new playable character, handler, and of course this means a new storyline.

In Killzone Mercenary, players will experience the role as just that, a mercenary named Danner. When it comes to being paid for their services, Danner is no rookie, instead he's a veteran of it and worked with the ISA quite often to make his name. In it we also get to experience something unique, a story-line that is completely new, one that gives us an insight to just how horrid the Helghast and ISA truly are. A few missions in players will see exactly what is going to unfold and how bad it is truly going to get. The most interesting part of it all was my time spent in it playing as a mercenary for the Helghast. What I had longed for in a Killzone game was interesting, well thought out, and let me revisit some of the maps I had seen post ISA invasion. With it I also learned some new facts about previous events in the Killzone series through Helghast Intel that was collectible throughout the Helghast portion of the campaign.

After having spent what time I did (a whopping eight and a half hours on Veteran) the game left me satisfied with my experience, the story, and of course the background they provided through the collectibles hidden through out the game. For those of you who want to hunt? Make sure not to kill specially marked icons on your mini map, those guys, they're important to "interrogate" through the games touch-screen based melee function. With it players will get to hone in their response times for when they move into the multiplayer.

Now that I've touched a bit on this a bit, it's time to move onto the major focus of the game, multiplayer. When it comes to Killzone's multiplayer, it is something to look forward to as it is just as solid as the campaign, if not even with it. Much like my hands on first impressions from the beta, Killzone Mercenary kept everything it originally had. thankfully though we did see much of the system carry over when it comes to gear, equipment, and load outs, lets touch on this first. In this game they let us use a shady blackarms vendor known as Blackjack sell us our weapons, supplies, and of course our VAN-guard based items. When it comes to VAN-guard players will be acquainted with a new feature that has never truly been seen before in a Killzone title.

The VAN-guard system is an interesting load-out selection, it allows players to choose from one of multiple items, and the ones I leaned to favor would be questionable and highly utilized. First we had the Ghost Generator, which does what it sounds like, provides players with a limited stealth capability that could and can be used as a tactical advantage. Though when it comes with Ghost Generator, players must note they will not be able to move fast, shoot, and of course use equipment without going out of stealth, which means use it wisely. My second VAN-guard of choice was the amazing portable airstrike - Skyfury. When it comes to deadly equipment, Skyfury is not an exception, it is the definition of amazing playing field leveling tool, and should be used as such. Skyfury will take players into a birds eye view, allowing them to see the entire battlefield at a circular angle as they move in such, and ultimately are able to target enemies that are highlighted with a red triangle on screen. Once these enemies are marked, players can then tap their screen on these marks, and well obliterate them into a pile of nothing. While using Skyfury, players must note they are left vulnerable, and defenseless. Do note that Skyfury CAN be countered by going into passageways and buildings, which leaves it useless, and of course ultimately open to being shot down.

The next one I had an in-depth affair with over the other two was the Porcupine Launcher. The Porcupine Launcher can be thought of as your mini-missile launcher. I found myself using it more often than any of the others thanks to its pure destructive power and ultimately the splash damage it had, which leveled the playing field to my advantage. The launcher is quite fun as it pops ups targeting reticle(s) on screen for players to tap, blow up, and enjoy an explosive show. However, when targets can't be hit they are marked as a blue diamond, which means the porcupine missile will miss.

There are a few things that will be notice that are shared between campaign and online, one is the spending and earning of Vektan Dollars, weapon purchases, and of course rank. Yes you read it, all of it is openly shared between campaign and multiplayer, which is a satisfying bonus. Though your loadouts will have to be made separately between the two, which is not a big problem, and allows for players to set up loadouts for multiple types of encounters. Players can also earn valor cards that will help them unlock feats, bonuses, and of course decks for trophies just to show off how much of a top end mercenary they truly are. Now that we've touched on all the above lets move onto the true multiplayer portion of the game.

In the multiplayer portion of the game we get to see three game modes, Guerrilla Warfare (deathmatch), Guerrilla Warfare (team deathmatch), and last, but not least, Warzone (a multi-objective based mode). Much like previous titles, Warzone is the seemingly most popular one, which gives players the ability to experience multiple objectives ranging from interrogation, hacker, bodycount (kill as many people as possible), and of course bounty hunter (collect as many valor cards as possible). Though there is five, one of them is a reshuffle of a previous objective, which is not a problem at all, and in truth shakes things up a bit. With these game modes comes a nice set up of six maps, inlet, shoreline, marketplace, zenith, refinery, and skyline. Each of the maps offers a unique experience as well as bit of detail that goes with the terrain. Some of them supporting zip-lining, close quarters combat, and of course at times long range combat. Players will be able to adjust to their teams play style as they adjust to the multiplayer and allow for a fragfest filled time in a four versus four lobby in each of the game types, allowing for a well rounded experience. Though the multiplayer size seems small, it's not, and this is thanks to the well crafted maps that assist with this.

When it comes to any Killzone, Guerrilla Games brings forth an experience gamer's would only expect from consoles, and that is a true to the core FPS title. After all this is said and done, Killzone Mercenary will paint a picture that players will love, hate, or simply come to process as a new fan favorite that made itself unique as a PS Vita exclusive. From beautifully wartorn cities on Vekta to the wasteland like terrains of Helghan, players will come to appreciate the masterpiece that has been presented forth in a true handheld HD presentation, and that itself is something worthy of noting as well as enjoying. For fans of the Killzone legacy, this is something truly worth getting a hold of, and quite honestly taking the time to enjoy.

Graphics: Like any Killzone title, Mercenary sets itself apart from other Vita games with astonishingly beautiful, detailed, and of course a movie like presentation all around. A true HD experience on a small OLED screen that has yet to be seen from any other title on the Vita as of yet. Though all this is said, players will at times run into a small frame rate hiccup, which is rare in occurrence.

Sound: Much like the previous titles, Mercenary was awesome in supporting the Pulse Elites, which gave it a true console like experience. From the explosive boom of grenades all the way to the cracking of gunfire, Killzone Mercenary stays true to the high end sound effects of previous titles, which to many is an amazing feat to be had. The title truly lives up to what it means to be a console like experience on a hand held.

Controls: When it comes to the Vita and a dual joystick based handheld, Killzone makes itself feel like it belongs on the handheld, which is no small feat. With smooth aiming, crisp motion sensing for motion based aiming zoomed in, players of the console titles will feel right at home during their sessions with the latest Killzone title.