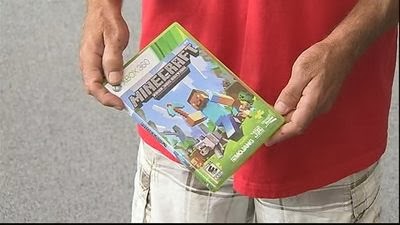 When it comes to games, violence, and well fingers being pointed - the gaming industry has it all. Recently was the most recent report of a nine year old child bringing a gun, a clip with six rounds, a small handled sledge hammer, and a steak knife to school according to the officer who searched his bag. According to the officials the child obtained these said items from his fathers home. According to the report on WFTV the officials at Endeavor Elementary School, said the 9-year-old boy told three friends before school that he had the weapons. The friends then reported their findings to school officials, who in turn are the ones that did this report.

According to the report on WFTV there were no injuries reported at the school, which is a nice thing, but brings to question - how long can games keep being used as a scapegoat?

In the report to WFTV, "I thought I was going to have a heart attack. I couldn't believe it," said the boy's father. According to the boys father, his son was just acting out the game, and that he believed his gun could never have been fired. "Well, the gun was stored in a drawer but the firing pin component had been removed," the boy's father said in his report to the station.

My take on this? When it comes to games we have to look at them like movies, games, books, or even music, they are a form of entertainment media. When it comes to things like this, it's no joke, and something that shouldn't be taken lately. Parents should let kids know how and when games are games, the difference between reality and virtual reality, and of course guidance that comes with it.

Though the question is - how much did these people know about games? As a Minecraft player it's easy to notice when a game is being pointed out, players can easily be seen using the weapons and resources given. The said resources listed below when it comes to tools and weapons that are base components:

When parents, officials, and unaware players, they should research into the things they are blaming. According to several other reports the father was caught saying, "he uses guns to kill zombies in his game", well dad, sorry, he doesn't. In truth he uses a sword or bow, which are noticeably different from a firearm. When it comes to things like these especially the accessibility to firearms, it brings in a questioning as to why the father had the gun that low in the first place, why he even though with a firing pin gone it was safe. In the game it is purely about building, harvesting, and of course creating your own world, literally. It's not like Call of Duty or Battlefield where the focal point is all about fighting other players. Instead this one is the most laid back, enjoyable, and group focused games that has ever been created. It is only a surprise to see that this game has been at the head of a blame based game the parent has played.

Gamer parents out there this is for you. Do you feel confident in your children gaming? If so or not so, why? Do you think parents need to be a bit harder on their kids with the games they are playing? At what extent do you believe kids should be playing games?

I've reached out to Mojang for their take on this and will report back when I get one.

The copyright to the photo belongs to WFTV and will be removed upon request.
Posted by Unknown at 3:59 PM