Rune Factory 4: A Beautiful Trip To Classic Gaming.
Originally Published and Copyrighted by Blast Away the Game Review on 10/3/2013
Review by Dustin Murphy 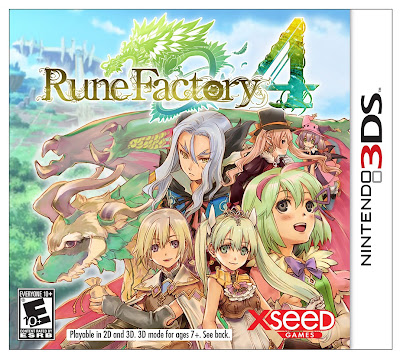 Final Opinion: When playing Rune Factory 4, I felt as if I had taken a trip back into my childhood, with games like Secret of Mana, Legends of Mana, and of course Harvest Moon intertwined. Some will say this game is not cracked up to the hype, but in truth it is quite good, literally. With hundreds of requests from villagers, conversations, festivities, and in-game interactions, lets not also forget the monster-tending, which was quite fun. Rune Factory 4 is just short of being one of the most interesting JRPG-Sims I've gotten my hands upon. A must have for Nintendo 3DS owners. 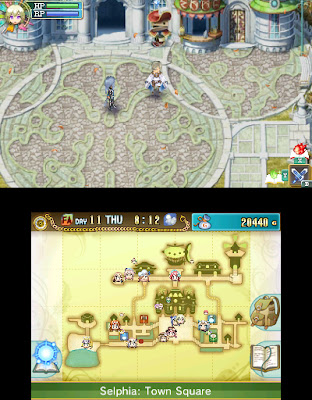 After having been able to sit down a bit longer and feel comfortable with Rune Factory 4, I was astonished at the level of detail, polish, in-depth story the title has by developer Neverland Co. Having spent already close to 40 hours with the title, I've been left with a smile, and of course a new found series to build upon. The story evolves around the male or female protagonist you are introduced to based upon your decisions in the intro, for the male players will take on the character Lest or the female Frey. For my adventure I decided to take on the role as Frey. Why? She from the beginning was rather hilarious, well animated, and of course bubbly. My second play-through (not completed either, there's over 100+ hours) for the 40 hours of game-play so far I decided to play the male character. So far Lest has been amusing, just like Frey herself.

After the course of the introduction my character was introduced to multiple characters, tutorials, and of course a bit of tending to village needs with festivities while also maintaining the village via projects. Lets just say my village is in a bit of need for help since I got side-tracked by deciding how bad I wanted to do the story, bother characters, fish, garden and of course take on the silly conversations with the villagers in-town. When conversing with them, players will see a Left and Right bumper button display pop up, what's useful about this is that it brings up alternative conversation possibilities. From silly little "I love yous," to Lets go on an adventure" dialogues, I found myself grinning from ear to ear with the responses, some of them even calling my character a liar when I used the "I love you" option.

However, for those wondering, as mentioned in previous articles relating in to this title, you can actually romance other characters, and of course betroth them. Luckily since I have not explored all the options, I was able to find an accurate list (will change it if not accurate), and here's the options below.

Male Options:
Amber: First boss in the game and a giggly woman who sprouts wings
Clorica: The stewardess who somehow is never awake or fully awake at that
Dolce: Sarcastic as they come and a lolita with a soft side.
Forte: The serious and seemingly self-centered knight of the story; Kiel’s sister
Margaret: Caring elf musician who performs at Porcoline’s restaurant
Xaio Pai: Clumsy, hardworking, and a rather amusing innkeeper.

Though for some, the heterosexual partnering may seem alarming, it provides for an interesting story as a kid will come forth from the marriage as well as bonding. How do you do this? Well having started working on my characters relationship with Vishnal the Black Star (Soul Eater) type personality filled butler, my characters adventure has begun in relationships, and so has my males with Clorica.

What also makes these characters and the relationships more interesting, from friendship to romance, is the voice cast. With actors like Erin Fitzgerald (Chie, Persona 4), Matthew Mercer (Leon Kennedy, Resident Evil Damnation), D.C Douglas (Legion, Mass Effect 3), and Cassandra Lee Morris (Nami, League of Legends). With a cast such as this it's only accepting that the voices are well done, humerous, and of course fitting for their actors. This truly helped bring the game out when conversing when the voices did pop up and become used. 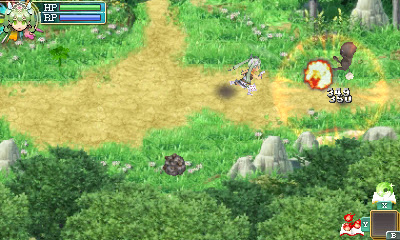 One of the important things I didn't get to tackle was the monster taming. In the monster taming portion of the game, which is at any time given, players can keep a combination of livestock, pets, sidekicks, and of course farmhands. For this to happen, players must befriend a monster, this is where they will have to give it something it likes; just like people. For some of the gifts it's pretty self-explained, but lets break it down. Lets say I want my character Frey to befriend a cluckadoodle (chicken), players will have to give it an egg, and you'd give honey to any insect like creature that resembles a bee or wasp. Once they are a friend, they'll live in a monster barn (this was explained in the beginning tutorials),that can be upgraded, and of course water the farm while you are gone, which is beyond useful. They, however do get tired just like your character, which means you should check on them accordingly. Some of the creatures also produce items that can be obtained by going to their monster barn each day; cluckadoodles lay eggs, buffammos (cow) produce milk and the woolies (sheep) produce the wool you'll need to upgrade some of your items. These creatures also have HP/RP (Health Points/Rune Points, RP = Stamina essentially) just like your character. So keeping tabs again, is VERY important, and must be done.

When it comes to the things I stated before in my hands-on-first impressions, I'd like to revisit, but shortly. The guide itself felt like a bit more of a review than it did an impression. So lets revisit it.

First off is the leveling up system for professions, weapons, and of course the character itself. Leveling each of these can be done by performing specific tasks related to them, some of them based on weapon uses that in turn unlock abilities, and of course others obtained by working on professions, which can require prince/princess points to expand upon; so far cooking has been my focus, food is a good thing to have. A good example is when it comes to combat, using a weapon can expand upon abilities it unlocks, and of course gives more edge against enemies, and especially bosses. Farming for EXP and of course weapon proficiency is a great idea. 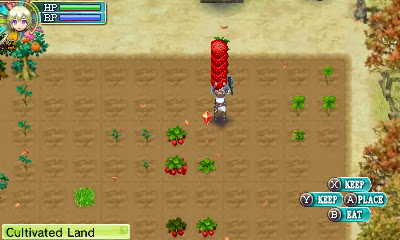 When all said and done, this title overall is amazing, beautiful, and a nice change from the seriousness of more recent titles. With a silly story, anime-like cut-scenes, and silly characters, this game will provide hours of fun, and by hours, I mean you can't put it down. Hopefully this is a title many will not overlook, and will hunt down. I know I will at one point obtain another for my bookshelf, for now the digital does just fine, and provides the same fun thanks to the easy to use control scheme. Players will have no problems getting into it fast, and moving along, which is just what I've done. Hopefully you all can do the same.

Graphics: Beautifully well done, even when meeting characters, players will get to meet beautiful anime-like scenes, and some of them will leave players giggling while enjoying the lunacy that is Rune Factory 4.

Sound: Amazingly good, taking a tribute back to what it meant to have a classic 16-32bit refresh. The music is charming, pleasing to the ears, as are the sound effects used in the game. Amazing voice acting to boot.

Controls: Overall very easy to use, leaving little room for problematic learning curves, and will leave players without question on button commands.

Release Date: Rune Factory 4, published by XSeed Games, a Marvelous AQL Brand, released on 10/1/2013 and is now available on eShop and at most major retailers for 39.99 USD.