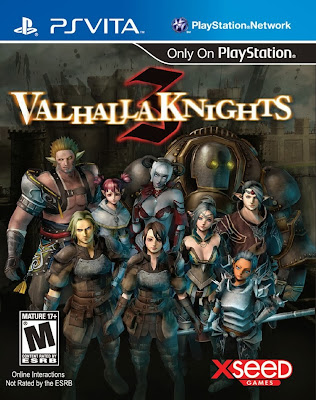 Final Thoughts: As much as I enjoyed a handheld dungeon crawlers that reflected the past series, this adventure once more into the Valhalla Knights series didn't do as much justice as I had hoped, but gave me an experience I was unable to stop playing. Having put close to 40 hours into the game, I found myself confident enough to review the game, and thus giving my input. For JRPG fans this game will be a solid must have, but for others, well it may be a pass-up till the price drops. As much as I enjoyed the difficulty I can truly say, the game had a few things it needs kinked out, and one is the A.I, which is almost useless. Exploring with friends and PVPing will truly take away from the A.I's inaccessibility to commands and tactics set up.

When it was first announced for the PlayStation Vita, my excitement personally had gone through the roof, and lead to me preparing my Vita once more for a JRPG that separated itself from others with gameplay mechanics, character creation, and class selection. In Valhalla Knights 3, it was not surprising to see classes such as Nightmares, Beasts, and Machines be hidden as unlockable features. Each of these races have a unique way of equipping armor, appearances, and of course weaponry. That is something that will be visited later, as well as a guide on how to unlock some of the races, and classes in a later article.

Valhalla Knights 3 to some could easily be called a Dungeon Crawler and to others a simple JRPG that has an open world, multiple areas to visit, and of course a vast array of side quests, gear, and story arching that could confuse others. The main story puts players as a prisoner of war from their fallen kingdom that had been destroyed by the emperor who is in search of a might treasure said to grant three wishes (chime genie in the lamp from Aladin music), thus which lead to our characters ultimate downfall and being a prisoner. After having been introduced to the game through creating my character, I decided to choose the halfling, go with an archer, and thus decide to venture forth. Through almost forty hours of game play or so, it was time to begin crunching out some quests, grinding, and of course make gold. Make gold you say?! Yes, unfortunately like any good dungeon crawler, grinding, gold supply, and leveling are among some of the largest attributes players will become acquainted with. Frustrated yet? Don't be for those of you who hashed out games such as Demon's Souls and Dark Soul's, this is another title much like them, and just as unforgiving like said titles.

The hardest part that came to the title was not the PlayStation 2 like graphics, but instead it was the A.I. partners that were almost useless, ones that made me want to bust my head into a wall. More often than not, it came down to having to revive, heal them, and ultimately babysit them by switching to them in order to keep them alive. After having done that, was I allowed to control my character, and begin to experience a short lived sigh of relief. Then the next combat would happen, and back to babysitting, which was something I did not want to do. After a while of messing with the commands, their abilities, and leveling them, was I able to see them stay alive (mostly) and watch them eat away at their cheap aid vials (health potions) only to eventually die once they used all nine of them. After having been frustrated enough it was time to attempt the multiplayer experience, PVP, and let out frustration.

The PVP in the game is much like I would expected - player controlled enemies that act much like the A.I, but with better reactions and resource use. It was not surprising to see people who slaughtered massive amounts rabbits for gold, buy equipment, and put new guys like myself to shame. However, perhaps it was because of lag going up against players in Japan or across the world, and my bad luck combined. Whatever it was, I decided I wouldn't return there soon, unless it was with friends - even that would be to soon. Unfortunately for those of you hoping for co-op, there's none, and that was a let down. It seemed as if there would be a bit of it, unfortunately with my experience, it's just a pvp funhouse that was ultimately a let down. Something I did once, and won't be doing again anytime soon. However, it is there for those of you who want to unlock trophies and special equipment!

After having spent a bit of time with the multiplayer it was time to hang my hat up, walk away, and return once more to the story. Why? Because that's where I was having the most fun after being humiliated more than once by players better than myself. Returning to it wasn't as simple as I had hoped, instead I found myself frustrated with having to use the directional pad to activate spells, then click "X" to attack. With real time combat, I found this problematic, and it unfortunately was killing me a lot. This being said, it would have been nice to see a "hold left button" and use any of the basic buttons like "x" to attack or assign spells and abilities to each of the other buttons. Instead for now though, players will have to adjust using the d-pad for all their assignments, and unfortunately maybe give up character and party commands in the meantime.

Among the problems with skills, players will have to level up each character individually, assign skills to slots, and of course gear their A.I. party members at the expense of their at times, hard to come by gold. So do remember, even healing items, and such that you want to use, as well as your team mates must be assigned by you to their slots or no one can use them. This is something very tedious, but worthwhile of noting. Same with if your main character or them dies and does not get a return vial used on them in a limited time, they must be revived at the priest. This is something that you players will get used to, and unfortunately, even I fell victim to this.

Aside from my few frustrations the experience I've had and continue to have with Valhalla Knights 3 has not been all doom and gloom. Instead I have found quite a bit of value to the games enemy grinds, gear hunting, and difficulty value. It reminded me of why I kept going back, getting myself killed, and started without my used equipment. Difficulty, it was all about the challenge based on difficulty. There were at times moments when I wanted to give up, but didn't quite due to the ambition I gave myself on pushing through, and of course continue to still march on to this day. With a story that seems semi-cliche to the cry-baby I want power Emperor to the vagabonded once hero, players can truly hunt down and enjoy comedic characters such as Emma, Veronica, and your team mate Carlos. For those of you wanting a lengthy dungeon crawl, lack of story, and instance access to gear. This is not a game I would suggest for you, this is a game for people who want to take on quests, hunt down powerful enemies, and navigate a at times idiotic A.I. that tend to shine at the worst of times to do so. This is truly a title I would suggest for those of you wanting a lengthy quest filled experience that also contains wacky moments of hilarity.

Graphics: It isn't surprising the graphics don't truly take hold of the Vita's raw power, but they luckily are not an eye strain, instead they are what would seemingly be a polishing of the PSP entry Valhalla Knights 2's engine. Something that stood out even back then.

Sound: Much like the PSP version, the sound quality hasn't changed much, instead it is small snippets of voice based reactions, and of course sound files seem to be taken out of it as well. This hopefully is improved in future titles.

Controls: When it comes to basic controls the game is amazingly easy thanks to the tutorial, but later in the title, the controls become hard, annoying, and down right frustrating. With spells bound to the d-pad, I found myself grunting, and wanting to remap them to my "x", square, triangle, and circle buttons. Hopefully we see this changed as well in future installments.