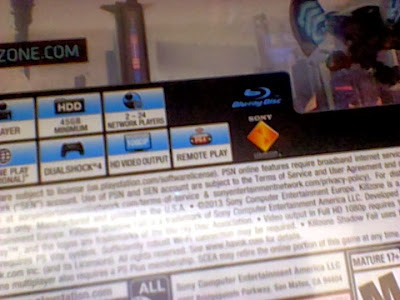 Earlier this week I got a call from GameStop that my Killzone Shadowfall by Guerilla Games was available for pick up. So low and behold I went to the store knowing that what I was long anticipated had become a memory hog for hard drives, but the question of how much it would use was to question. We had only heard rumors of a memory size close to if not over 50gb's of the PlayStation 4's 500gb release day hard drive size, and we were not let down, instead they gave us something very accurate; 45gb's before the games updates.

When I saw this it made me come to question how much we would truly use in order to fill our hard drive space up, something that lead me to wonder, ad possibly even write about. After hearing rumors that Call of Duty Ghosts would reach around 49gb's install size. After having heard this it lead me to wonder. Could we see games that are going to be further optimized for smaller install sizes versus hard drive sizes. Unfortunately, we've not heard much in regards to the XBox One and if its games will require a game install before playing, but instead what we do know is that the games for PlayStation 4 (not all) will allow you to play as they progressively install. We also know that in order for the PlayStation 4 to work offline, that we must allow the PlayStation 4's to update to add a few features, and of course we won't be playing the famous game of "Watching the Download Bar!".

However, with these install sizes I can imagine many gamer's will luckily take the option that Sony has given us; replacing the hard drive. When it becomes available, I'm sure we'll be taking advantage of recording a video for you all, and of course show you EXACTLY how it must be done. This is something we are truly glad to see Sony take advantage of again, just as they did with the PS3 and of course memory cards for the PlayStation Portable. Now only if we could see that happen with the PlayStation Vita.

With this information, how do you our readers feel about next generation games, does this concern you or will you take advantage of hard drive replacements? I know I look forward to swapping mine out soon as it becomes affordable. Let us know how you're going to approach this with next gen.
Posted by Unknown at 1:25 AM