Ascend: Hand of Kul - Falling Hard on Micro-transactions
Originally Published and Copyrighted by Blast Away the Game Review on 9/26/2013
Review by Dustin Murphy. 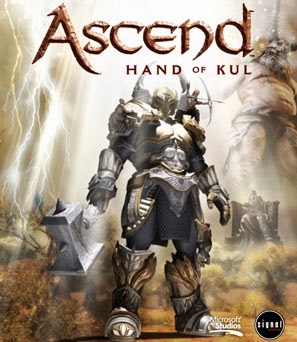 Pros:
-Very easy to use and execute controls
-A hack-and-slash RPG game that resembles titles such as Fable
-For a downloaded game it's graphics are actually amazing.
-Fully customize-able characters
-Open world style arena gives players a fight against others for territory in a capture and hold style mechanic.

Cons:
-Micro-transactions take away from the game play, making it hard to gear up, repair, and otherwise level up abilities.
-True PVP and co-op are hidden inside the game menus and are not explained.
-Equipment and spells break to easily or have limited use.
-Very poorly explained stat system.
-A pay-to-win title.

Final Opinion: Unfortunately Microsoft and Signal studios released a game that truly could have rivaled other free to play titles if they had made the micro-transaction system less embedded into the game. After spending half a day with it, I can truly say this game had great ideas, a beautiful graphics system, and an interesting leveling system, but I'll not be touching it again unless things change. For those of you wanting to have a grind-fest, spend a little cash, and hammer out enemies, this is right up your alley. 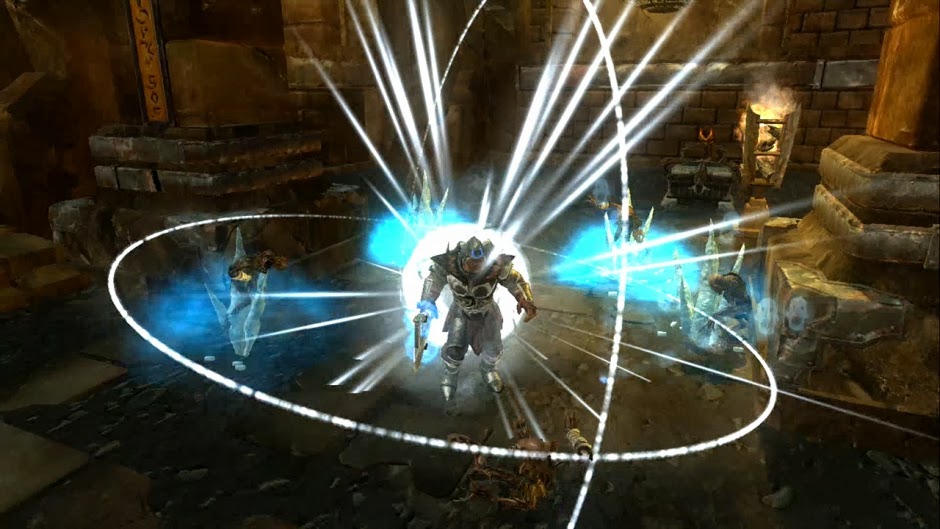 In recent months it seems that the free-to-play market as well as the MMO market have been a huge focus for both Microsoft and Sony. When it comes to it, Ascend: Hand of Kul is no exception to this, and it shows when playing online. After having booted up the game it was very quick (based on connection) to download the games updates, assets, and overall new environment that was installed via in game updates (think like a game launcher). Once the downloads were done, everything was installed, I was introduced to the games introduction video clip. It gave me what seemed like a very well built story that it could develop fully on and give us an ultimate god like creature versus titans type story-line, instead I was given a tutorial on how to build my characters appearance (much of this even items are locked behind souls, which can be purchased or unlocked via playing), armor selection, and ultimately my faction; Dark, light, or Caos. After having done said all of these selections I was given abilities and new quests that lead me to more soul purchasing in the game. These purchases were quite simple - repair, upgrade, and re-stock spells.

After having spent all my souls on almost all the tutorials recommendations I was brought to the realization that I needed to quest, level up, obtain more souls, and ultimately upgrade everything I could. Unfortunately, this is a big problem with this title is simply the micro-transactions ruined the entire experience. Within a few hours I found myself doing as many quests as I could, finding new gear (broken at that and needed repair), farming souls, and of course progressing on my story. The issue here? The entire pay-to-play experience was being forced. Half way to level cap, unfortunately I quit, and removed the game. Much of my time was spent taking over shrines, "temples", and of course going on a murderous rampage of goblins, undead, trolls, and of course once in a while enemy player minions who decided to invade my "realm". 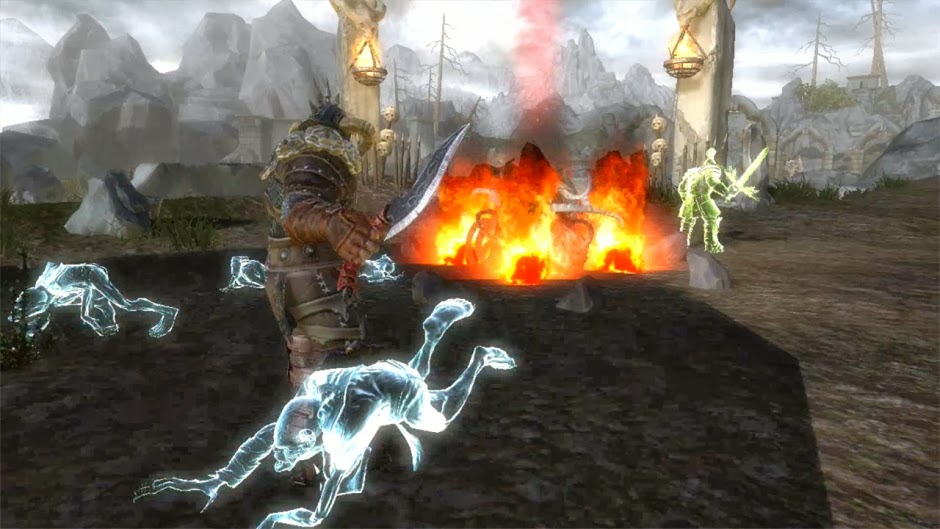 When it comes to making a game innovative, this one fell flat on its face. Having taken queues from Demon's Souls as well as Dark Souls, Ascend: Hand of Kul executed a new invasion during questing experience that was fresh, and let alone interesting. The problem that came forth was quite simple - everyone did it during the hardest quests and would cause you to fail. That was the goal though it seemed, screw over other players as hard as possible, and ultimately make their life hell. While this was interesting it was also problematic, very problematic and cost me to actually at one point quit and hope the server thinned out, and eventually did enough that I was able to complete my quest, and continue on. After hitting the level cap, I Ascended my character, resetting my level, equipment, but carrying on my spells as well as currency. Having done this was quite entertaining as I visited new areas I'd never seen before, and even dove through new combat mechanics. Some of them requiring players to quickly charge out of enemies ways, and well sometimes right into them due to the invading other players with spells, and causing a onslaught of two to three enemies to charge after you. Some of these enemies could quickly rain on your parade and end your experience.

Outside of the invading the game was very simple. It was in many ways a focus of capture and hold. The idea was to simply take territory, fight off enemies, and ultimately take an area for your faction. For me the faction was caos thanks to their AoE spells, dots, and plentiful amount of snares. As for the others? The game was bad enough I didn't try them, admittedly didn't try them, and this was because of the focus on micro-transactions, and the focus on constantly spending souls to level up as well as repair and upgrade. After taking as much terrain as possible, and moving on with their story, players will be introduced to new areas, new enemies, and of course more powerful equipment (spells are considered a part of your inventory). The story evolves primarily around your character serving a deity, becoming their warrior, and ultimately taking all the land and the world eventually for your faction. When it came to pvp the game was interesting when it came to this, in many was it reflected a World of Warcraft style fight system. By this I mean a battleground where players will fight players in order to conquer, dominate each other, and of course prove their faction worthy. 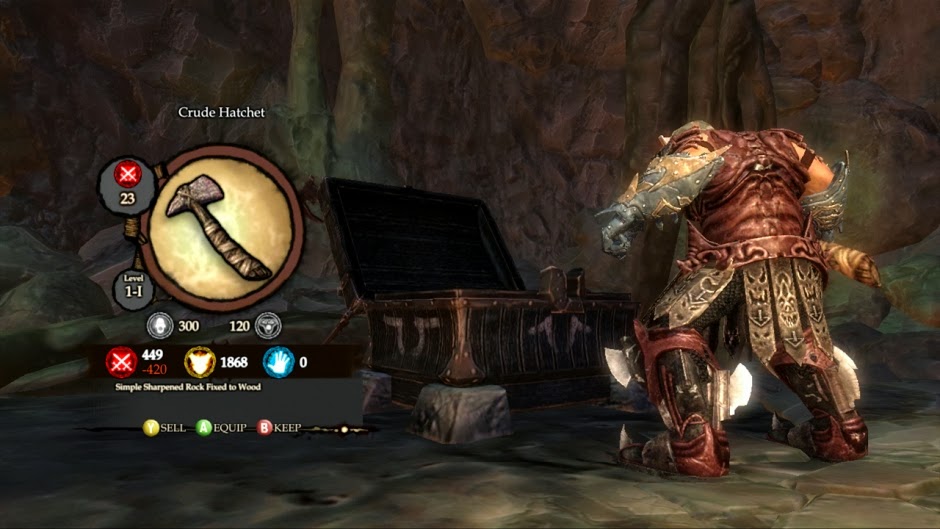 Ultimately the game is flawed, borrowing from many well known titles, and of course trying to make itself something new, something innovative, and it did that in many ways. Sadly all those ways were bad decisions and ended up costing an entire group I was playing with (9 people) to delete the game off their XBox 360's only to play a different game in order to clean their eyes out from the bad eye candy they saw. With beautiful graphics, beautiful animations, and a detailed world it is only a wonder as to why Signal Studios as well as Microsoft focused so hard on a micro-transaction based system and didn't focus on the idea of possibly making only cosmetics micro-trans-actionable as well as editing the cost of spells, item repairs, and of course character creation based skins. Overall, the game could have been much better, and currently sitting in patch 1.2, it's advisable for players to try Fable, Kingdoms of Amalur: The Reckoning, and enjoy something more pleasing. Unfortunately due to the game being repetitive, dull, and overall a cliché title, I'll not be seeing this again in the foreseeable future. I suggest sticking to their titles known as Toy Soldiers, they are much more pleasant, and lighter on your wallet. Hopefully this changes in the future or at least see a better balancing job.

Graphics: The games details are quite astonishing as the world changes around you as you take shrines and alters for your faction. Fighting animations as well as the detail to the world is amazing, but won't compete well against higher development costing titles.

Sound: With a beautiful soundtrack as well as voice over system, Ascend: Hand of Kul could very well stand up there with games such as Fable, Kingdoms of Amalur: The Reckoning, and even Defiance. From the cracking of hammers to the shattering of trees, rocks, and even enemies heads the game gives a life-like impression to some players.

Controls: The controls are quite simple for players to learn especially people just wanting to crack heads, burn enemies alive, and reap the world for their taking. Overall it's very straight forward with a very in-depth tutorial.

Official Facebook: Ascend The Game
Posted by Unknown at 12:55 PM