Bethesda Softworks Announces Game of the Year Edition for Dishonored

As of this morning Bethesda Softworks®, a ZeniMax® Media company, has announced that Dishonored®: Game of the Year Edition will be available in North America on October the 8th, 2013 and throughout Europe on October 11th, 2013 for XBox 360™, PlayStation®3 computer entertainment system and PC.  The Game of the Year edition is a definitive compilation of the crittically acclaimed first-person action game that has won more than 100 Game of the Year Awards from outlets such as Game Informer, PC Gamer, Yahoo!, GameSpot.com, MSNBC.com and CNN. In addition to this it has also been given the title as 'Best Action/Adventure Game of the Year' by Spike TV Video Game Awards and was also named "Best Game of 2012" by the British Academy of Film and Television Arts (BAFTA) video game awards.

Dishonored: Game of the Year Edition will welcome players new and old to the game with a full collection of the game, downloadable content, and of course trials that are available. In Dishonored many gamer's will once more take the roll as Corvo in the games main mission. Corvo is as noted, a supernatural assassin who is driven by pure revenge. In the title the player will shape the world around you based on choices of death or life for those whom have done wrong.

Dishonored is an immersive first-person action game that casts you as a supernatural assassin driven by revenge.  With Dishonored’s flexible combat system, creatively eliminate your targets as you combine the supernatural abilities, weapons and unusual gadgets at your disposal. Pursue your enemies under the cover of darkness or ruthlessly attack them head on with weapons drawn. The outcome of each mission plays out based on the choices you make. The games setting is Dunwall, an industrial whaling city where strange steampunk-inspired technology and magical forces coexist in the shadows around the inhabitants of the city. Corvo is the at one time trusted bodyguard to the Empress Jessamine Kaldwin and her daughter Young Lady Emily Kaldwin. After having been framed for her murder, Corvo becomes a infamous assassin, known only for his mask that has become his calling card. The game is based in a time of uncertainty, when the city has become besieged by a plague and has become ruled by a corrupt government armed with industrial power, and dark forces conspire to bestow upon you the abilities beyond that of any known force, but at a great cost to Corvo. The truth behind the betrayal runs deep as the swampy waters surrounding the city, which has also consumed the life Corvo once knew. 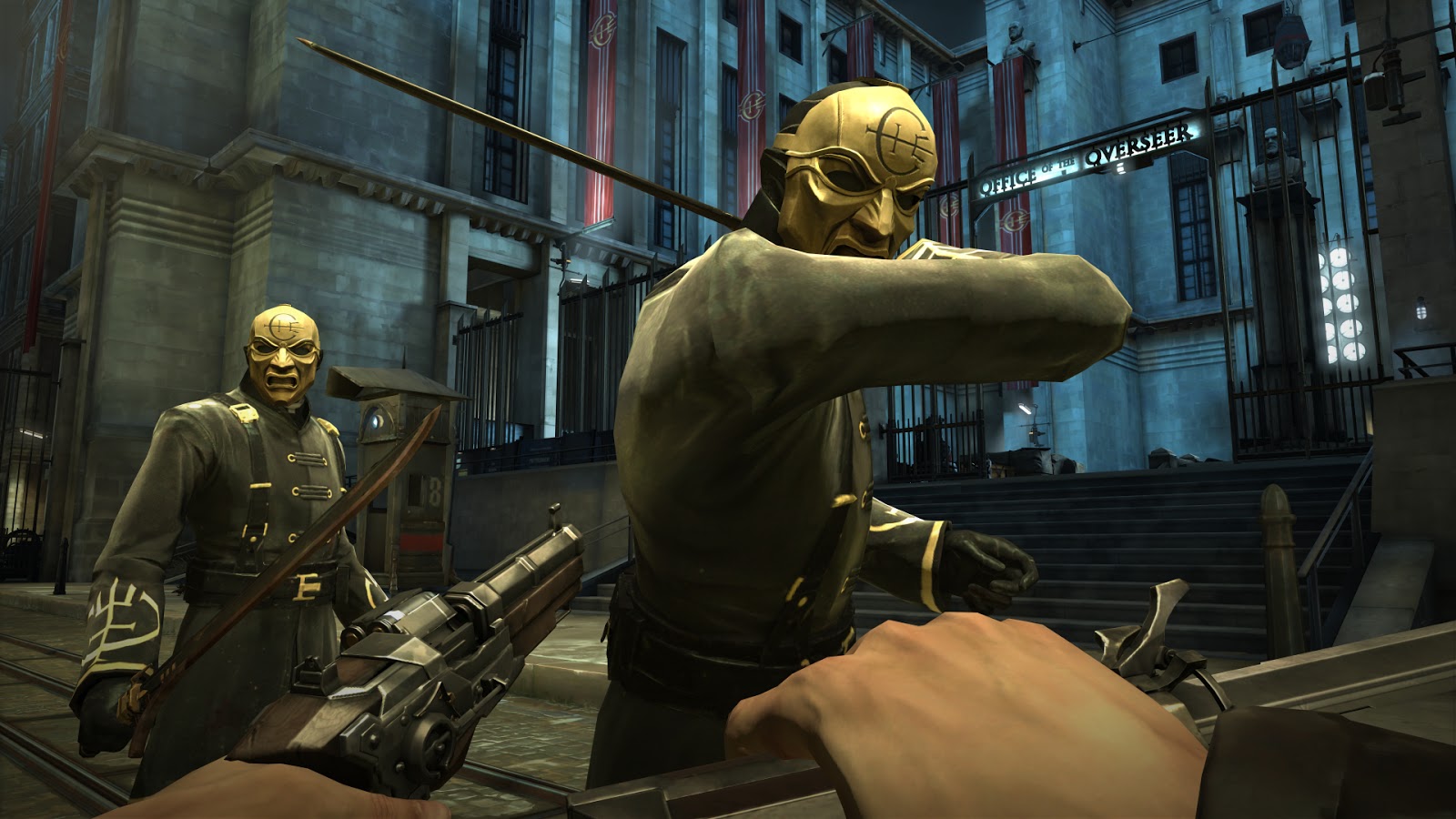 For those unfamiliar with Dishonored the game is all about improvising and innovating. The approach to each of the games assassination is based on the players own style of play. Some players will choose to stick with the shadows and use sound to their advantage for making their way through each level unseen by enemies, and attack enemies head-on as they respond to a players mistakes with aggression. The other will allow players to go head on as a bold attacker, fighting their way through each level with a flexible combat system that allows them to creatively combine abilities. The supernatural powers and gadgets players are given will allow them to dispatch enemies in their own unique way and ultimately create their own play style based on their actions. Action and meaning also follow players heavily based on how they play. As players kill, rampage and murder their way through the game, the story will show the plague grow, and in turn the world around them becomes dark and grim. Players who decide to play quiet, stealthy, and not kill their targets as they find the truth behind the betrayal will find a beautifully landscaped land, which will not grow violently overcome by the plague and the rats that come with it.

The world of Dishonored was envisioned by the Half-Life 2 art Director Viktor Antonov. With his help Arkane and Bethesda will take players on a story of Corvo and the master assassin Daud to experience a truly unique title that will take them on a twist through a dark and corrupt world about them.

The Game of the Year Edition also carries several DLC's, the first being the Dunwall City Trials.  Dunwall City Trials, the game's first post-release DLC, was released on December 11 of 2012, and contains 10 challenge maps. The player must defeat waves of enemies, complete time-trial challenges, and perform a series of drop assassinations in which the player kills a target by dropping from a location above the target. Completing these challenges will allow players to hone their skills as they shoot to become a master assassin. 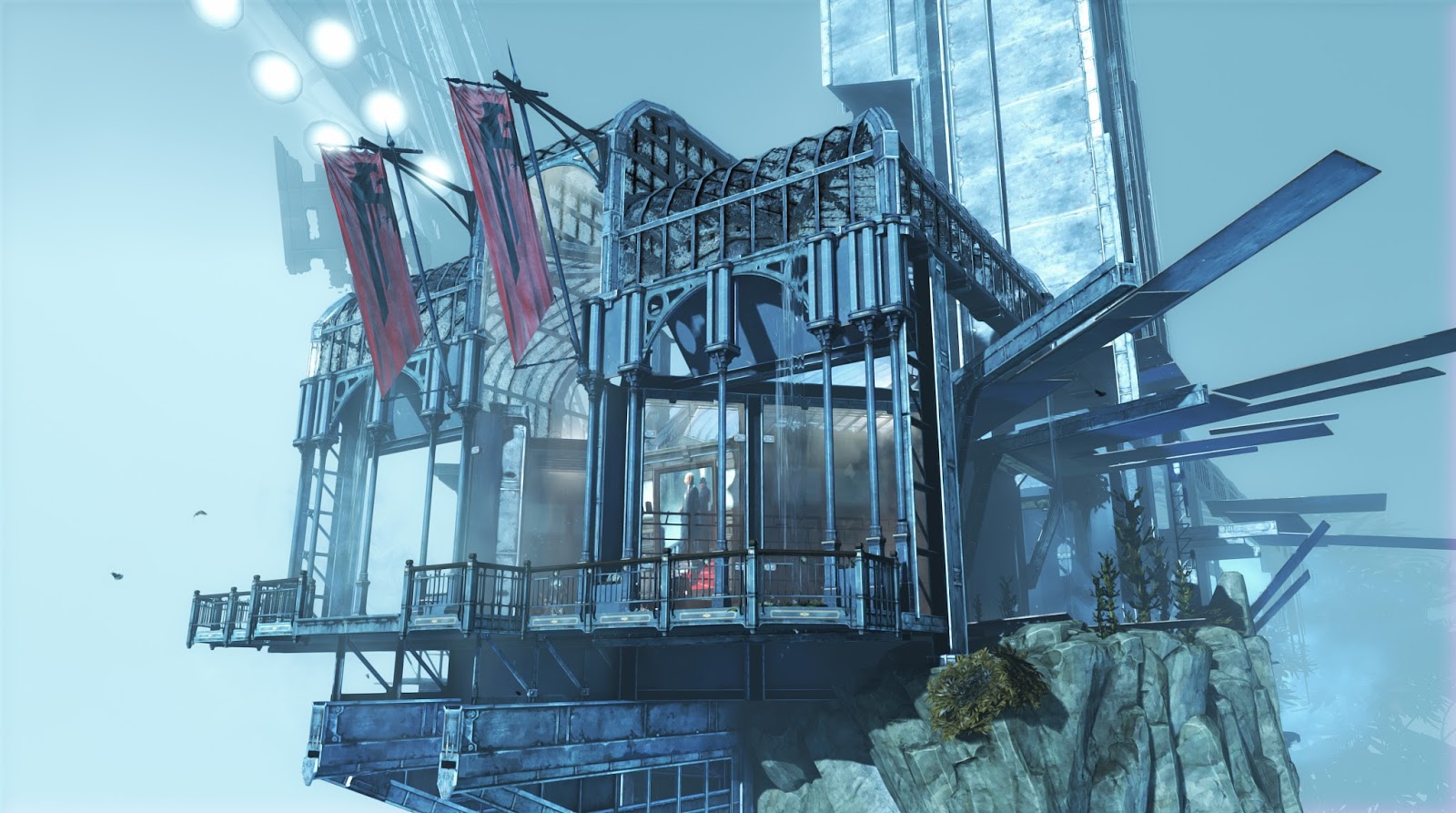 Shortly after the release of the Dunwall City Trials, Dishonored recieved its first story-based DLC, The Knife of Dunwall. In the DLC The Knife of Dunwall, players take on the role of Daud, the master assassin who killed the Empress. In this DLC players will go on a new inspiring perspective of Daud, his weapon access, gadgets, allies and of course his own set of supernatural abilities.

The Knife of Dunwall takes place after Daud's assassination of the Empress, and forever having changed the fate of Dunwall. Players will Embark on a search for redemption. The Outsider, a entity players of the original title will know, reveals the key to Daud's atonement, but who or what is it when he mentions a name - Delilah? Accompanied by the Whalers, Daud and his band of mercenary assassins will search the districts of Dunwall that have never been seen before till now. Players will find themselves fighting never-before-seen new and just as terrible enemies. Players will also find themselves using a new and unique set of arsenal that enhances upon the already unique combat system Dishonored employs, as well as the mobility and stealth based systems that are in place with the existing title. In Daud's struggle to hang onto the last shred of his humanity, players will ultimately decide his fate. 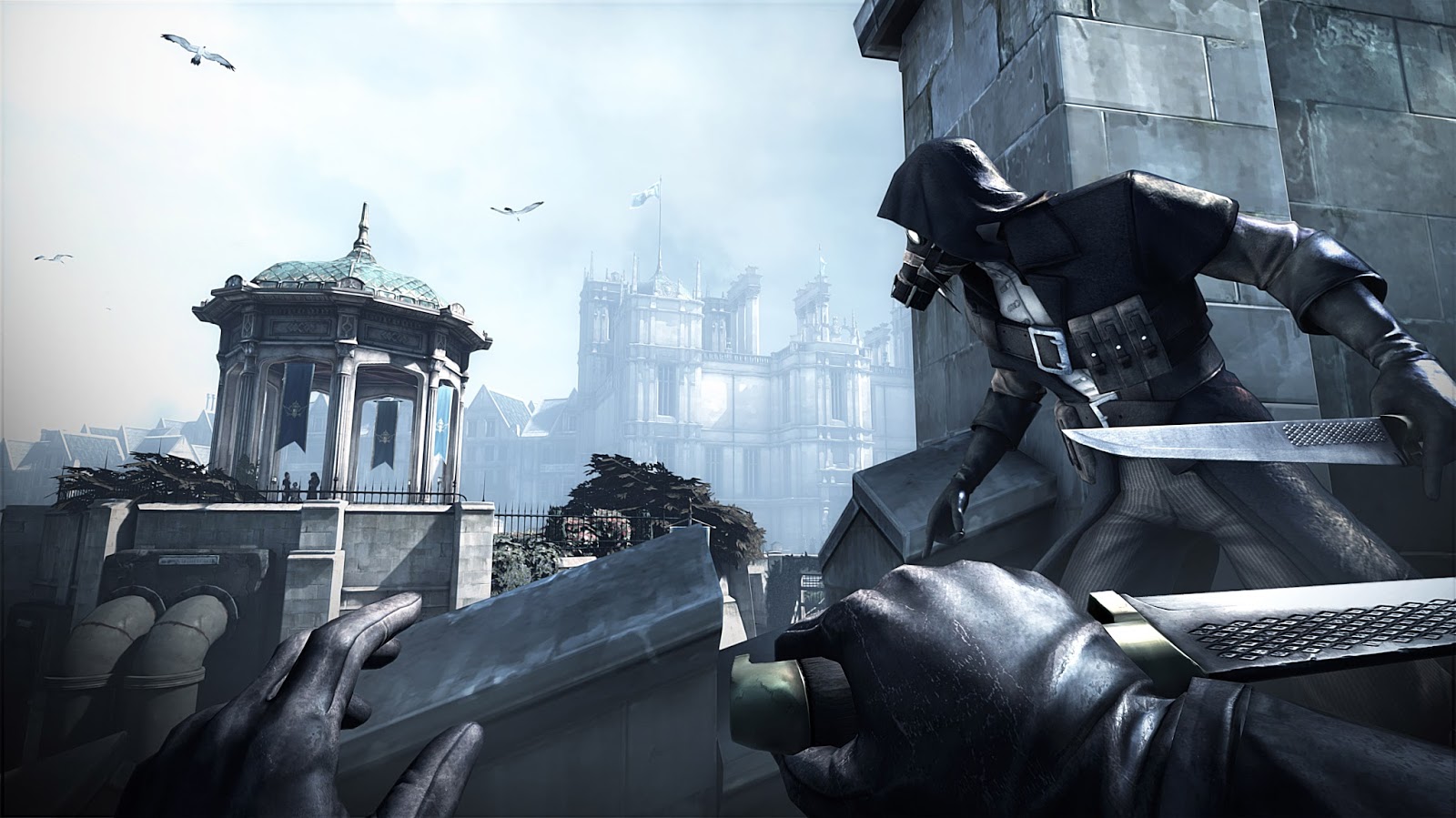 In Dishonored: The Knife of Dunwall, players will embrace the mark of the Outsider as it empowers their character with unique supernatural abilities, much like Corvo. They will call upon the Whalers to assist in combat with the ability 'Summon Assassin', they will also track down hidden Runes and Bone Charms with the ability 'Void Gaze', and of course use new variations to powers that the will be familiar with from playing Corvo, such as the ability 'Blink'. With the new content also comes new weapons and gadgets such as Chokedust to daze enemies, and in turn whale oil powered Stun Mines to shock targets, and of course the new concealed Wristbow to launch sleep darts and explosive bolts to dispatch enemies as desired.

Players will also get to explore more of Dunwall through going to areas such as the Legal District where they will infiltrate the Rothwild Slaughterhouse, a place nly known as a steaming factory filled with amazingly large whale carcasses and their titan size butchers. Players will also revisit the decaying Flooded District, the location where they will be familiar with Daud's hidden base. They will return to scenes from key events in Dishonored, but with a new perspective, including the fateful moment that set of the betrayel of Corvo and his journey that follows. 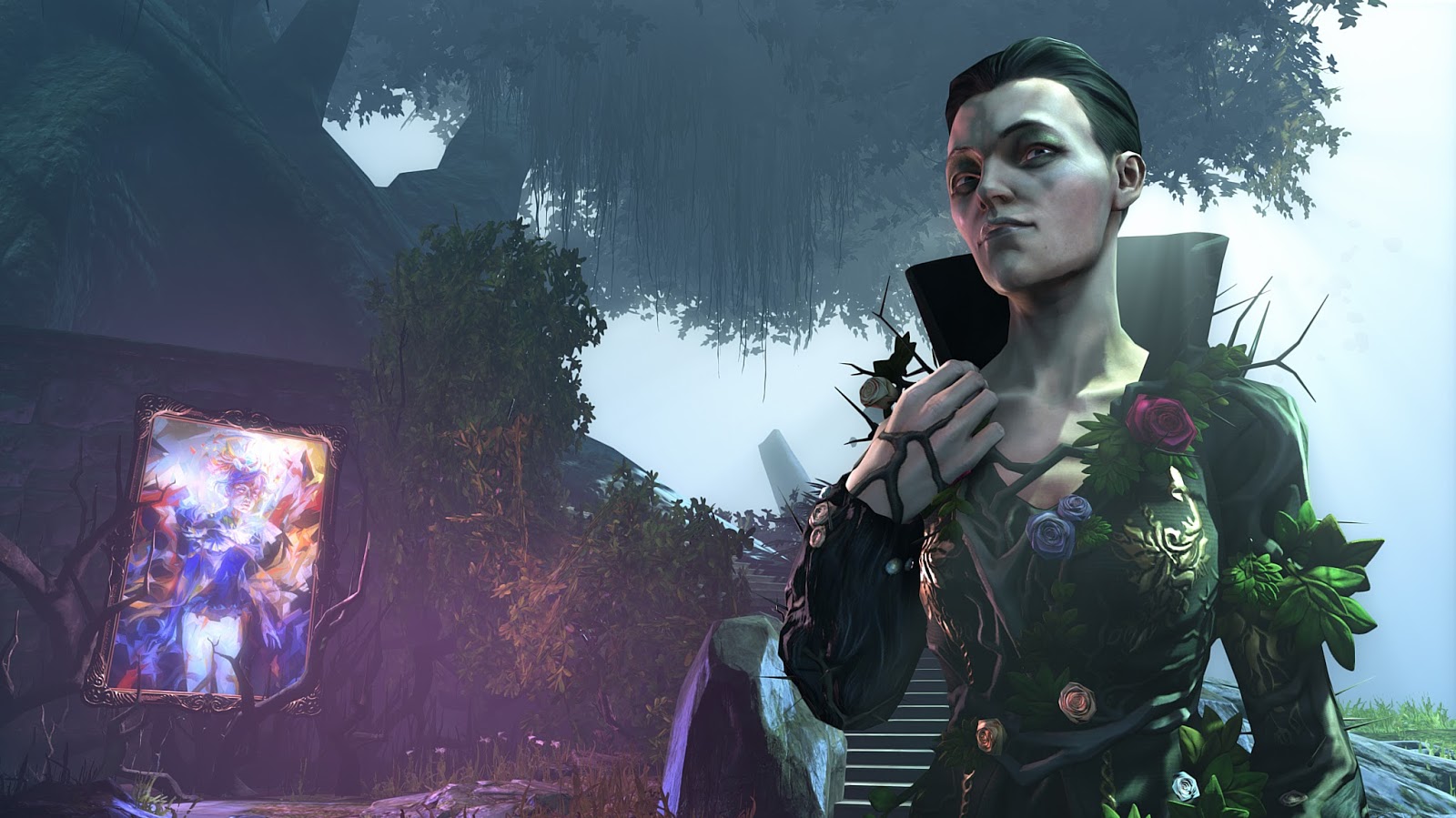 As players create the path for Daud, they will search for answers, and approach each mission with their own style of play just as they did with Corvo. Daud's Redemption - or his turn towards darkness - depends on the players skills and decisions they make. Players will also discover the mystery behind Delilah in this stand-alone chapter, and of course conclude it in the next add-on, the Brigmore Witches, which is available immediately thanks to the collection.

In Dishonored: The Brigmore Witches, players will once more continue their story as the legendary assassin, Daud. Players will once more access Daud's unique weapons, gadgets, allies and supernatural abilities, and bring his twisted and dark story that began with The Knife of Dunwall to an end. After discovering the idtenity and intentions of Delilah, the leader of the Brigmore Witch Coven, players set out to disrupt her from completing a powerful ritual that will only spell doom for Daud. Having already been betrayed by his lieutenant, Billie Lurk, players must reply on feuding gang factions known as the Dead Eels and the Hatters, to negotiate their way through previously unseen districts of Dunwall while en route to Delilah's stronghold. No matter how players decide to play their game, stealthy or agressive, they will reach their destination, and one this is certain - Daud will finally answer for his treacherous actions and fall before the mercy, or punishment, of the Royal Bloodguard and Assassin, Corvo Attano. 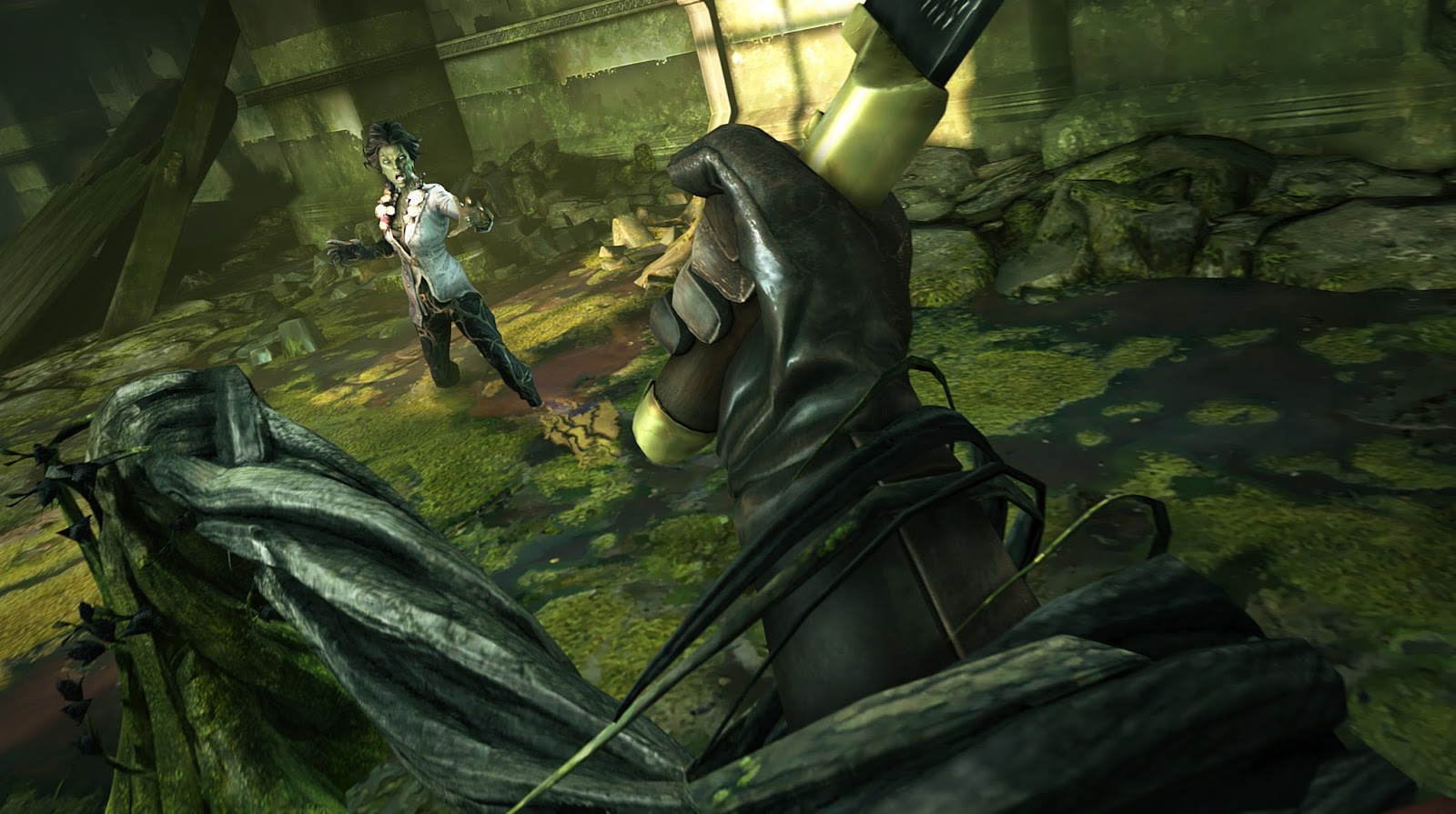 In Dishonored: Brigmore Witches, the mark of the Outside empowers Daud with unique supernatural abilities. Players will find themselves quickly drawing enemies towards them only to suspend them helplessly in the air or use them as a human shield with the ability 'Pull'. Players will also once more be able to call upon the whalers to assist in combat with 'Summon Asssasin' and track down hidden runes and Bone Charms with Daud's ability 'Void Gaze'. Players will also once more see the return of gadgets such as Chokedust to daze enemies, while whale oil-powered Stune Mines shock them while players use their will concealed Wristbow to launch sleep darts and explosive bolts to dispatch enemies from afar. 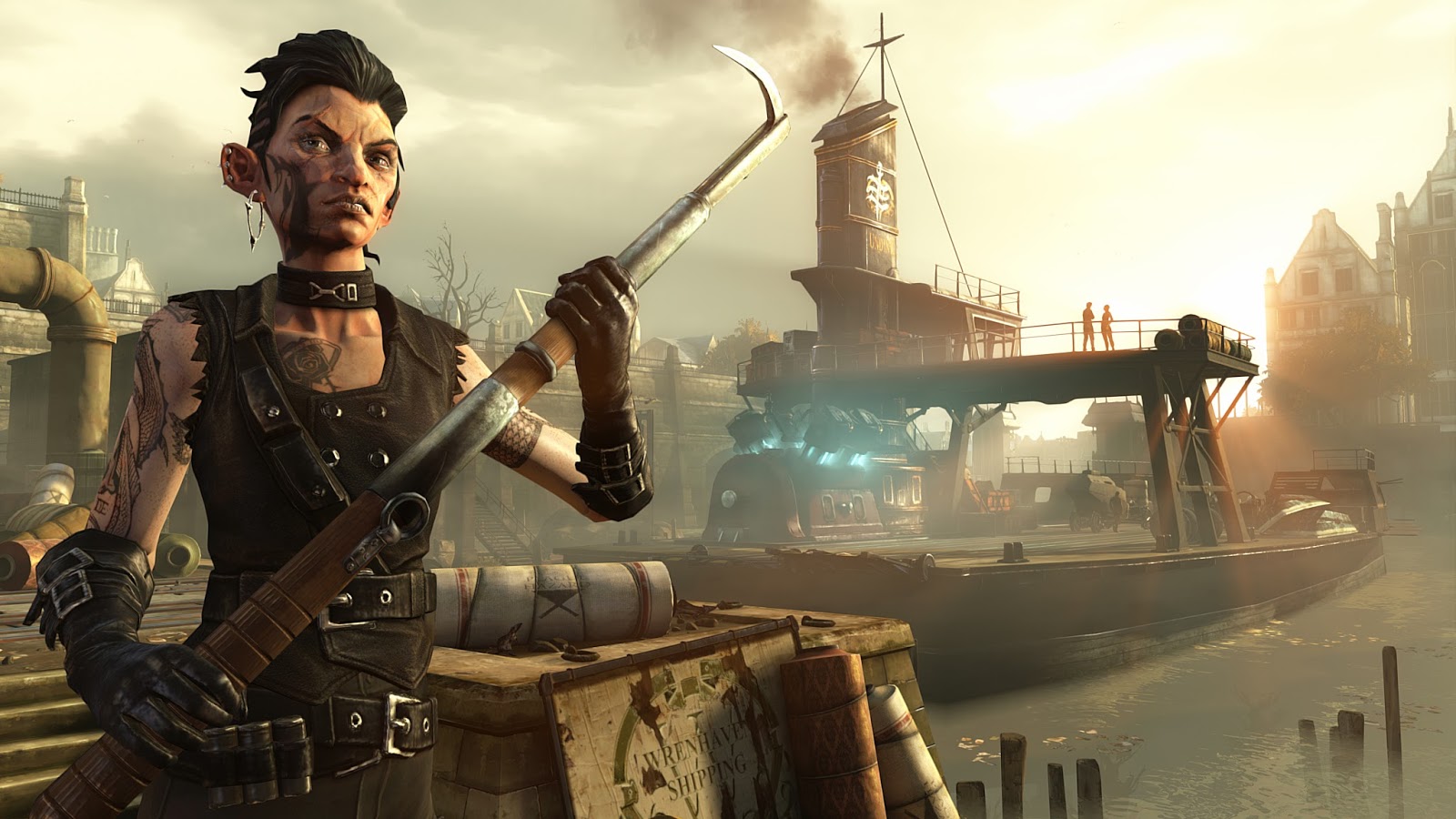 Players will also get to experience new areas such as Draper's Ward and explore its streets, hazardous and beautifully designed sewers while also going through two rival gangs' home bases: the textile mills and the boat docks. Players will revisit the rotting Coldridge Prison, which they must infiltrate in order to free the dangerous but imprisoned leader of the Dead Eels gang. For the grand finale, players will attack the gothic Brigmore Manor, where Delilah and her Brigmore Witches dwell and await Daud's reckoning. While on Daud's quest to thwart Delilah's plans, players will also get to approach each mission before with their own play style. Daud's redemption or turn towards darkness depends on the players skills and the decisions they make. Players will be able to determine Daud's ultimate fate as they conclude his journey in The Brigmore Witches.

Recently Pete Hines, VP of Marketing and PR for Bethesda Softwork's came out to make a statement, and below you can read his unedited statement upon the title.


“Dishonored introduced a new world and cast of characters which have really resonated with gamers around the world since its release in October 2012,” said Pete Hines, VP Marketing and PR, Bethesda Softworks. “We’re now excited to offer people the opportunity to have all of this great content in one package.” 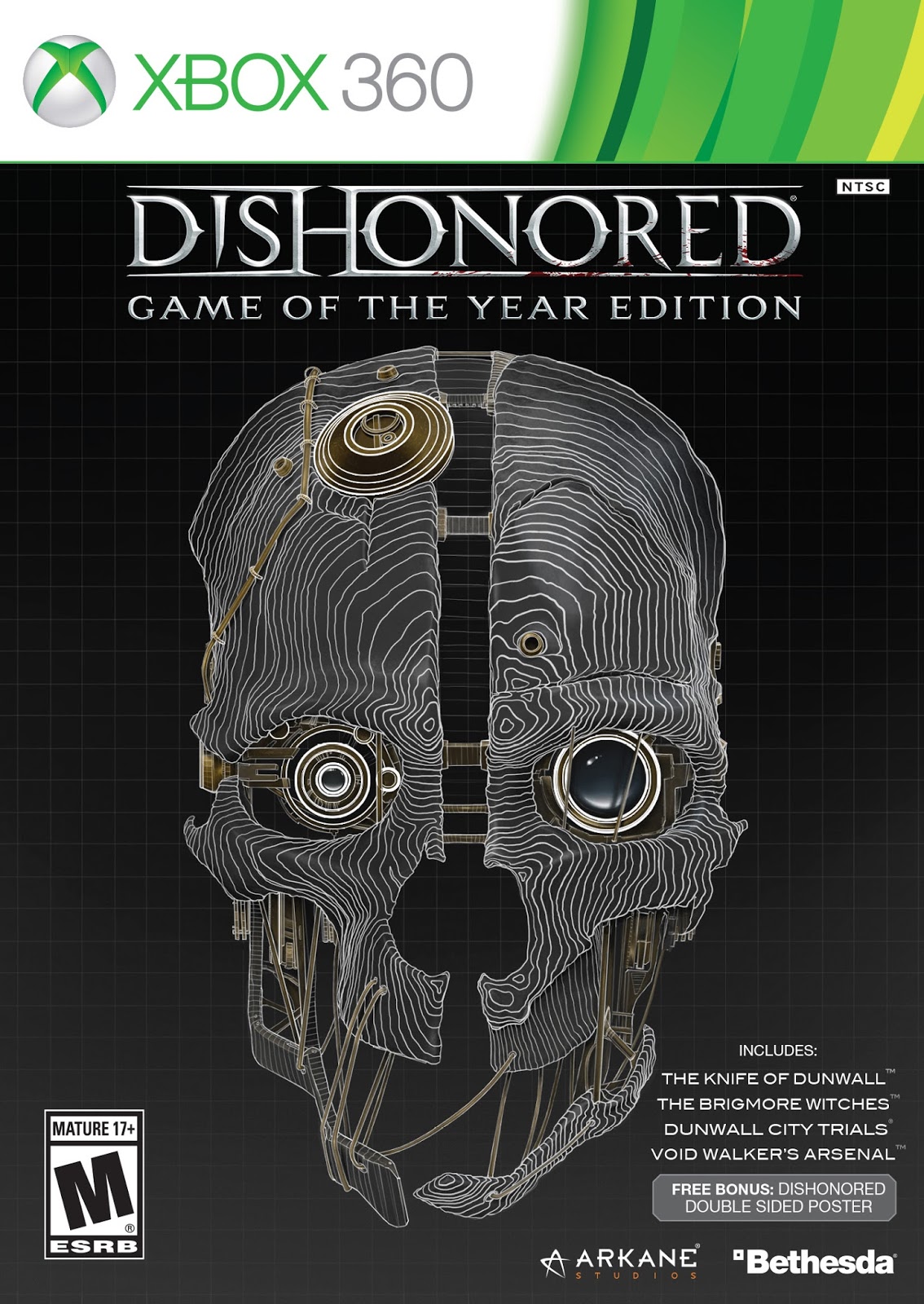 About Bethesda Softworks
Bethesda Softworks, part of the ZeniMax Media Inc. family of companies, is a worldwide publisher of premier interactive entertainment software. Titles featured under the Bethesda label include such blockbuster franchises as DOOM®, QUAKE®, The Elder Scrolls®, Fallout®, Wolfenstein®  and RAGE®.   For more information on Bethesda Softworks’ products, visit www.bethsoft.com.

Dishonored ® Game of the Year Edition © 2012-2013 ZeniMax Media Inc.  Developed in association with Arkane Studios.  Dishonored, The Brigmore Witches, Void Walker’s Arsenal, The Knife of Dunwall, Dunwall City Trials, Revenge Solves Everything, Bethesda Softworks, Bethesda, ZeniMax and their related logos are registered trademarks or trademarks of ZeniMax Media Inc. in the United States and/or in other countries. Other product and company names referenced herein may be trademarks of their respective owners. All Rights Reserved.