The Final Hours are Nigh!

Mighty No. 9 Record Breaking Kickstarter Reaches Final 24 Hours!
Originally Published and Copyrighted by Blast Away the Game Review on 9/30/2013
Written by Dustin Murphy. 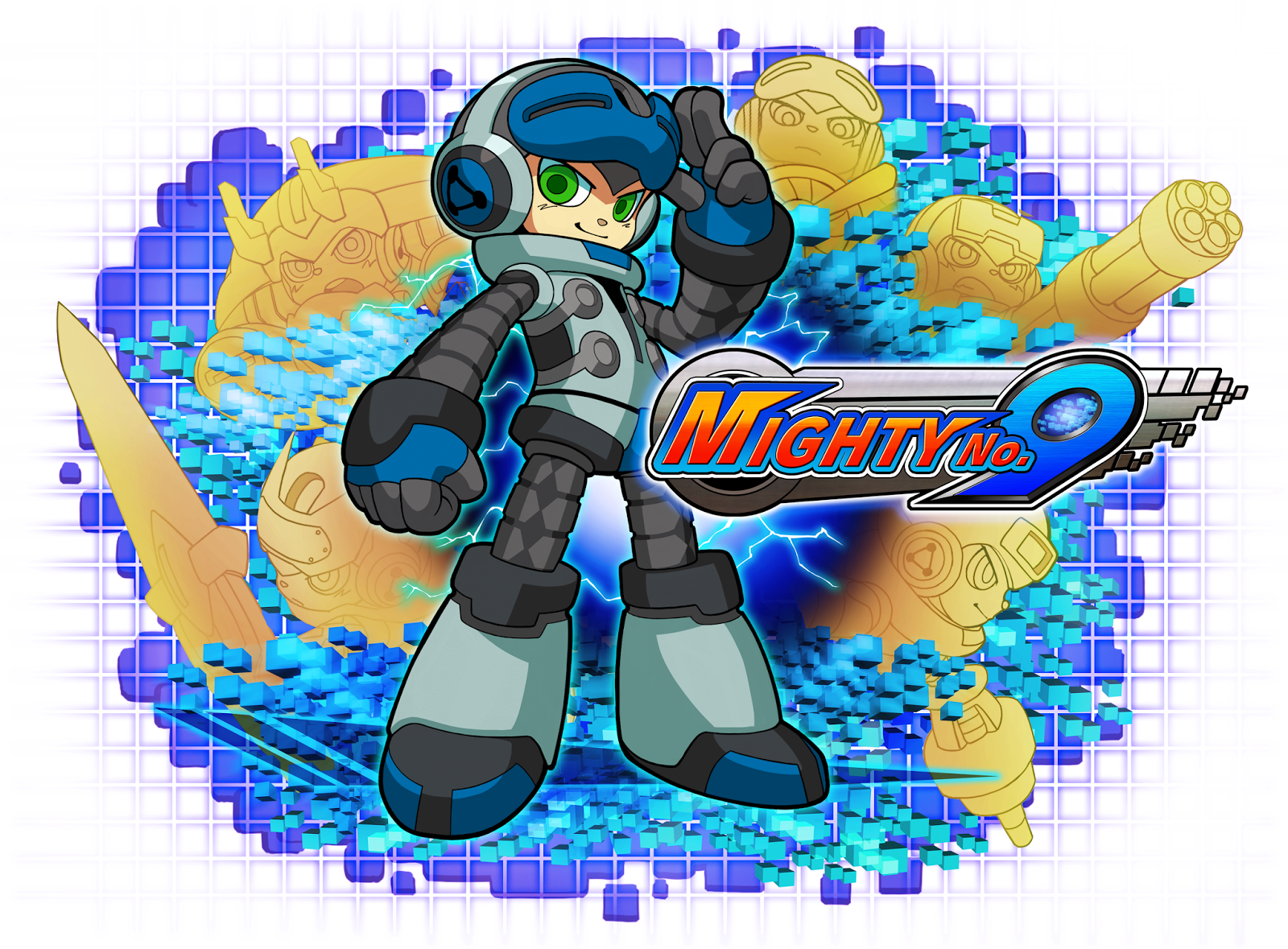 When it comes to the goals that they have set, they have been made with exceedingly possible funding, and that's not all; Keiji and his team are shooting for PS Vita, Nintendo 3DS, and next gen console releases sometime in the future if the goal can be reached at 3.5 million USD in funding. Though with the final past few days of this campaign we've seen a few cool things release. One of the released items that caught interest is the first development demo to come out of them through their official Kickstarter page. Take the link below to see what is in-store for us. The video description and information can tell you how hard at work these guys were with this test video. 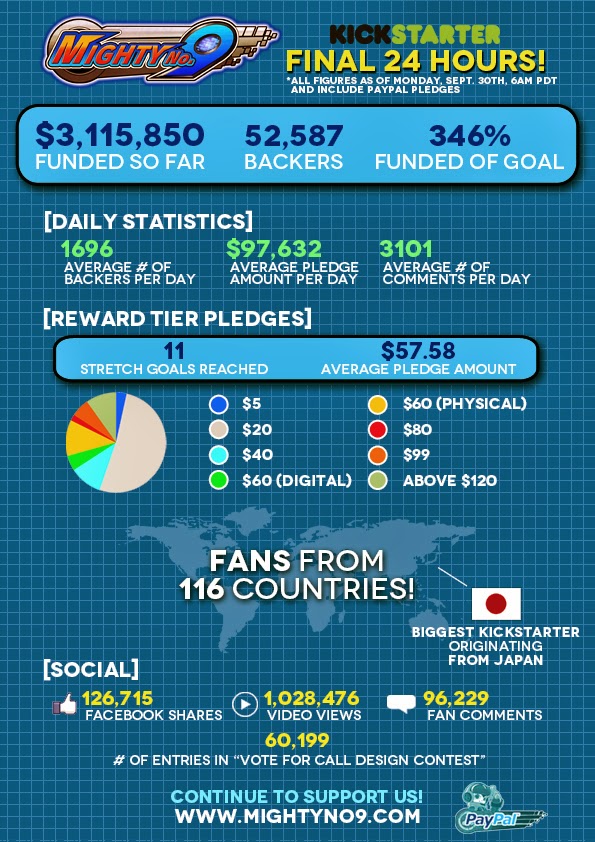 When it comes to Kickstarter bonuses, gamer's, founders, and of course fans are eager to see what they get for their support, and of course a physical disc and USB "cart" have been added to the list. What does this mean? Well you fans of the NES- and Famicom-style fanatics will enjoy this USB drive as it looks just like a game cartridge from those days. Check it out below!

When it also comes to Keiji Inafune and his team at Compcet, we now knew their passion going into this, but that passion just got a whole lot bigger. Announced recently by Keiji and his team, the musical composer Takashi Tateishi and sound producer Ippo Yamada have joined the talented team to bring a true classic experience. Many of you will know Takashi Tateishi for being the composer for Mega Man 2 and of course Ippo Yamada from Mega Man Zero, Mega Man 9, and of course Mega Man 10. For the full statement take the link below!

When it comes to working with the fans, this game has been everything up to that and some. When it comes to this project, the team wants input from all the fans on knowing what the heroine should look like! Well interested in your opinion? Take the link below, check their facebook page, and or both to cast your vote!

We knew when I stated earlier that the goal of three million USD was being broke, we didn't know just was at stake, well I'm here to tell you just that. Keiji and his team added te stretch goal for next gen as well as the handheld versions mentioned before to the goal list. Well with how close we are it will be saddening to some (such as myself I know) to not see this happen. If you are interested head over to their Kickstarter page, throw in a few bucks, and help push the game to that goal.

Want to see what the team has been doing? Well here you go in their first episode of The Mighty No. 9 dev-documentary, showing an early behind-the-scenes look at the creation of the game!


Interested in seeing a behind the scenes with a livestream from the team? In the final hours of the Kickstarter, running on Tuesday, October the 1st, from 3pm to 6pm PDT, including team interviews, live backer Q & A and of course, a special guest, Inafune himself announcing the winners of the our Call heroine design vote! Of course directly from the team here's a thank you from them! 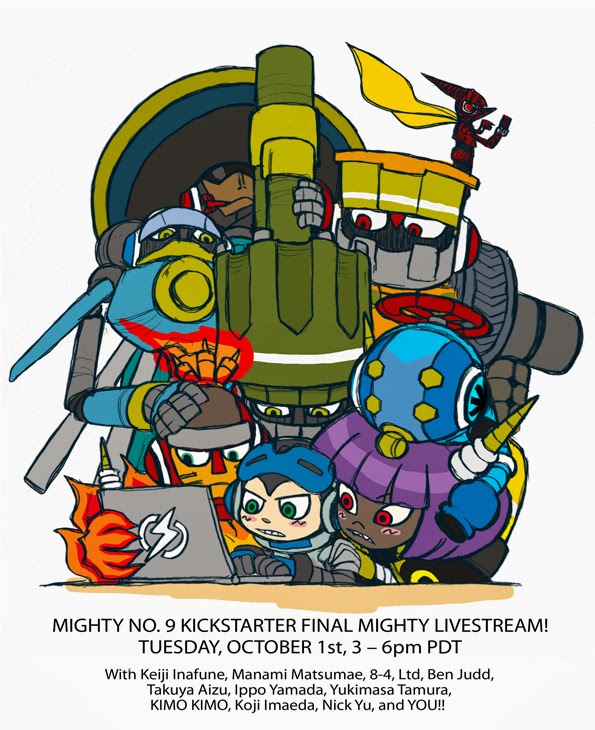 Quotes from around the industry about Mighty No. 9!

“Inafune-san is one of the most legendary game designers on the planet. Everything he's touched has been massively influential not only to my career but also the amount of fun I've had throughout my childhood and into my adult life. I look forward to this project with bated breath!” - Cliff Bleszinski Co-creator Jazz Jackrabbit, Unreal, Gears of War

“Kickstarter is an appealing system, but there's been this assumption that an indie game can only perform so well there. So I'd like to express my gratitude to Inafune-san and the Mighty No. 9 team for blowing that pessimism out of the water. On top of that, this veteran creator has shown us all that, no matter what your age, it's never too late to take on the challenge of making the games you want to make. I hope to follow in his footsteps.”
Takumi Naramura (Nigoro) Director, La Mulana

“Inafune-san is best known for creating a videogame icon, but perhaps his biggest impact is how passionate he's always been about listening to his fans -- even before social media, community management or Kickstarter. And now those same fans (myself included) can give Inafune-san a chance to return to his roots and create something amazing in the genre he helped define. I don't know about you, but that's SUPER/ULTRA/MEGA EXCITING to me.

Now let's get Mighty No. 9 on next-gen and handhelds!”
Nathan "Mighty No. 92" Vella President, Capy Games

“To all of us independent developers and creators, Mighty No. 9 is a truly inspiring project. It's a rare game that has its creators and its fans so in sync with each other, and I hope it gives birth to lots of smiling faces!” Yohei Kataoka (Crispy's) Director, Tokyo Jungle

“I'm looking forward to the birth of a new franchise from this Kickstarter! Best of luck to Inafune-san and my friends at Comcept, Inti Creates and 8-4.” Christian Svensson Former Senior VP, Capcom USA

“I really have no idea who this guy is (...or...) what his stupid game looks like.” Michael Pachter, Games Analyst, Wedbush Securities

Additional information and updates on Mighty No. 9 are available at: