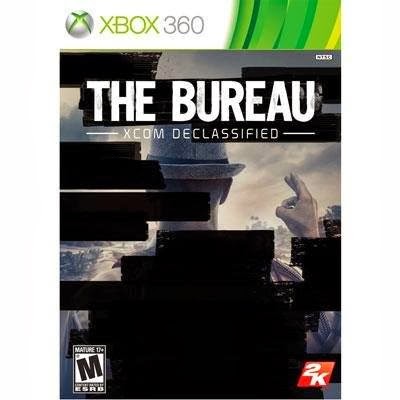 Pros:-Story sticks true to it's time period in 1962
-Builds upon the back story of XCom Enemy Unknown
-Offers a true difficulty for tactical third person gamer's
-Very detailed character models for main characters of the story
-Back story for game is based on hidden collectibles
-Free roam within mission based locations

Cons:
-Poor A.I partner that gets itself killed
-Multiple endings, and a branching story based upon choices made
-Character models outside of main characters are hideous
-Short story spanning nine hours per completion
-Frame rate and lock up issues
-Weapon choices are more limited than backpack sets

Final Opinion: While I enjoyed The Bureau, at times it was hard for me to truly enjoy the game due to the A.I. which I felt 90% of the time I was babysitting. The other issue I had with this game was primarily the lack of detail when it came to character models that were not primary characters to the games story or aliens. Definitely something that needs improved before they launch another game. With all issues put aside, The Bureau XCom Declassified is a solid title that will deliver a unique story line as well tie in with XCom Enemy Unknown and will give a unique take on strategic third person shooter titles. 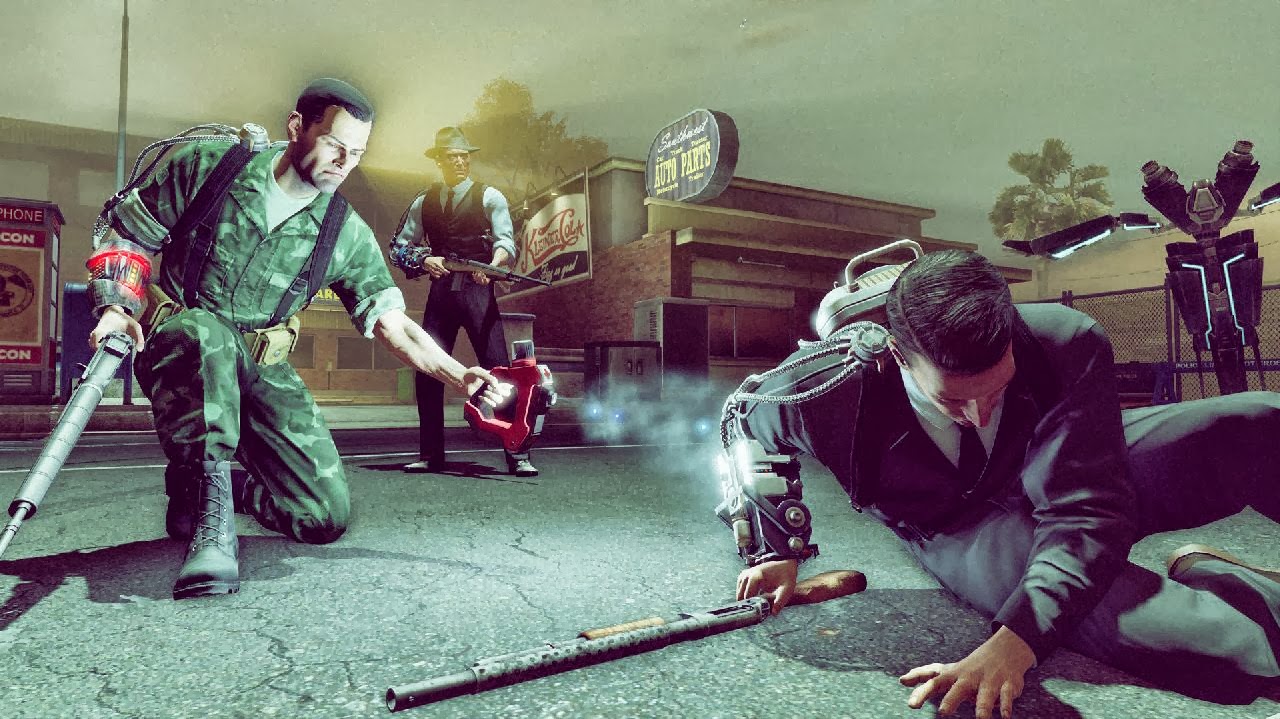 After having been asked by Josh Turner of Blast Away the Game Review more than once to try out this game, I plugged it in, and hesitantly booted up my campaign. From the get-go this game was noticeably was not going to have a slow pace to it, instead it revved its engines and fired up straight from the very beginning, and never slowed down. This became a very welcome change from the titles that have to build up their story before players really feel as if they aren't dragging on from beginning to end. The Bureau takes place in the 1960's and puts you in place of Agent William Carter, a CIA Agent that has been sent to the Groom Facility, a location where he was sent to meet with The Bureau's top dog, Myron Faulke. It is within this intro clip that players will get to see everything go to pure insanity right off the back. From watching the mysterious case blow up, players are introduced to the games alien invasion head on, and in turn the mechanics of the A.I partners. In the introduction and throughout the game I was introduced quickly to using the 'B' button to access the command menu where I was giving orders to my character as well as the A.I partner. 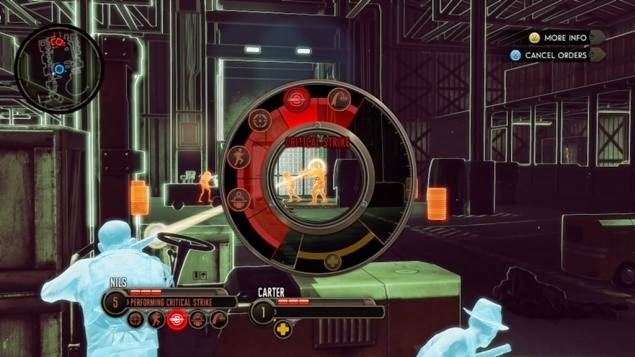 Throughout the game players will find themselves adjusting to the wheel more often-than-not, for those of you used to games such as Mass Effect, Dragon Age, and other titles of the such - this should be casual to you. For other people unfamiliar with the title, this menu will become somewhat of a bother, but fear not it's useful and gives you time to set up a tactical take on the battlefield. The problem with this - babysitting the A.I, unfortunately this is something that desperately needs fixed, and I truly hope the A.I does get fixed, this is game breaking as the A.I.'s if not babysat, will get downed 9 out of 10 battles in the game unless you get the drop one enemies with your own abilities.

With a constant hand-holding of the games A.I, I was fortunate enough to make my way through a very well adventurous exploration in the first few zones where I found myself constantly exploring in order to find collectibles, but guess what? I did, I was able to find hidden alien guns, army weaponry, and of course collectible items that gave me a background story behind the games events. However, remember, this game is all about back story, hidden items, and of course tactical decision making to give players a true field leader feel. In turn it also builds upon the character we will endure for the entire game, Agent Carter, which is fortunate as many games seem to deviate from doing so. 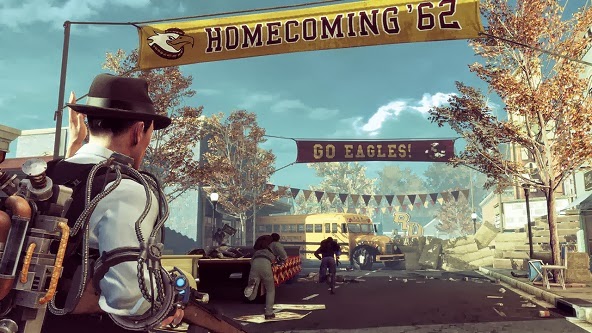 Much like XCom players will spend some time between missions wondering around the base where they will do several things, hunt down collectibles, gain intelligence on enemy encounters, recruit new squad members, and of course change out their weapon set ups as well as their squads. Players will also get to send squads of agents out on 'Agent Missions', and of course take on main story as well as side mission's to fulfill their story as well as gain important assets, and of course level up (this is highly suggested for those playing the hardest difficulty). Do note at times based on how you talk to a character can restrict the information they will give you, thus making it harder for your character to get information, and in turn causing the ultimate reactions to your character to become negative.

When it comes to combat players will be rather familiar to the old play style of using a cover style based third person shooter, from hitting random forms of cover, players will also be able to analyze enemies through the ability wheel. Bringing this wheel up, players can hold down the left trigger in order to scan the enemy in order to bring up their stats, this includes weapons, abilities, and what the class does best. When it comes to the enemies scan details, players will also learn about that enemies role in combat, for example; Muton's. Muton's are gigantic brutes that the alien forces use as their brute force tank, they are strong close range, allowing for quick dispatching of you as well as your squad. Another instance that can be tied to this is your squad members being downed can cause you to lose them, and by lose, I mean permanently. Luckily for players who lose one of their squad members, they can be replaced with new recruits allowing for players to fill the required spots, and ultimately also pick up a new variation for squad set ups. This is highly recommended in general so that players have a bigger tactical advantage on the battlefield. 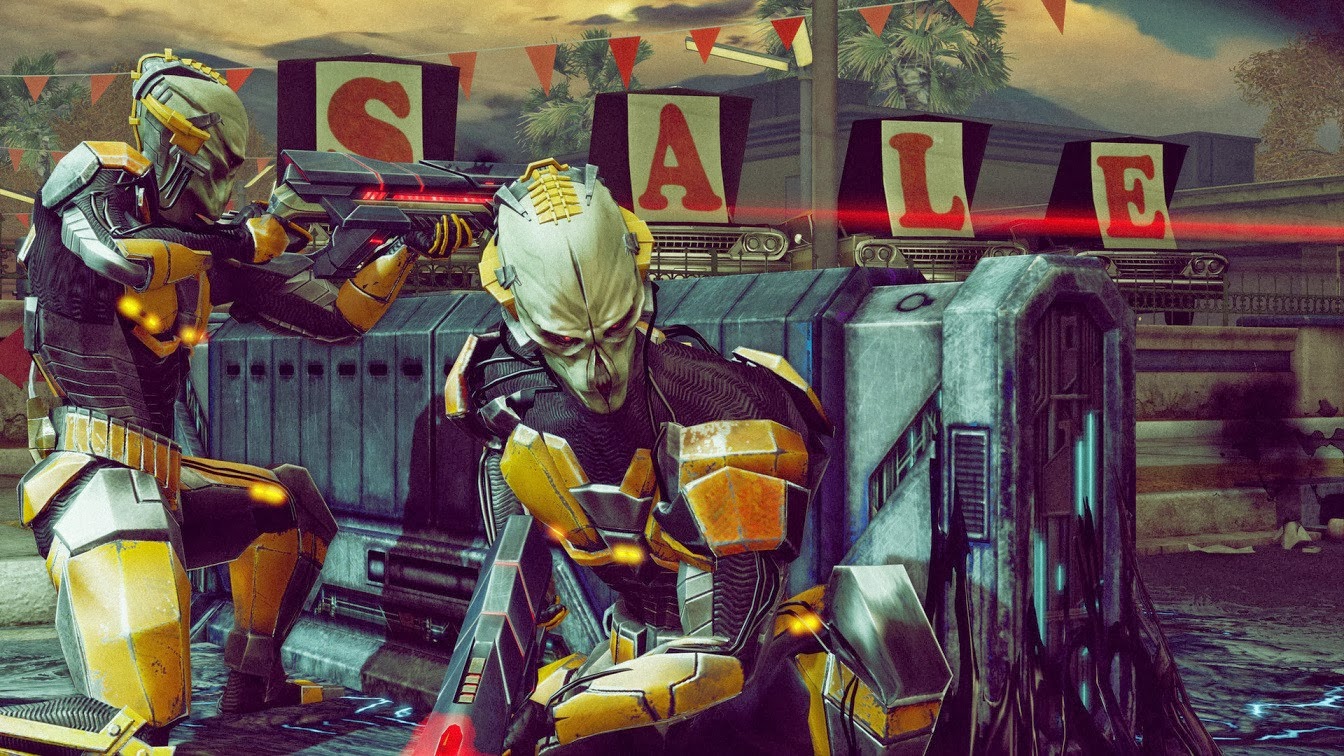 When it comes to voice acting and script, 2K Marin does not drop the ball, instead they have a knack for making indepth and very well voiced storytelling that gives the game its true emotional value. From words of the era to the military roles on base, many players will be able to experience a truly detailed 1962 event, that also lets players feel as if they were experiencing an event that took place at the height of the Cold War between the United States and Russia during John F. Kennedy's tenor as president. The part that makes this game interesting isn't just the detail to these events, but the fact that they stuck true to how the military was run, the roles men and women played in the military forces, clothing, as well as details to how American culture was in the 1960's.
The details to this are amazing, making the games authenticity even more noticeable, but at the same time players will be quick to notice the things that take away from this detailed title.

When playing The Bureau there were bugs, irritations, and of course annoyances that begin to appear as the game progressed. First lets start with character models, when it comes to character models, players will be able to notice the depth to detail when it comes to the main characters such as Agent Carter, Faulke, and of course the inevitable to meet Agent Weaver. After having met up with these few I had taken to the pleasure of exploring and seeing how detailed the textures were, what I found was rather disappointing. From afar non-player characters look greatly detailed from the agents on base, to the military members there, and of course the scientists, I was quick to note the muddied figures that had seemed as if they were pulled straight out of a early generation XBox 360 game, which was quite disappointing. After having taken note of the missing polishing on these faces I decided to get closer to the terrains such as the on base map, vehicles in certain levels, and of course later on the textures for any form of terrain I could see. What I found this time was low detailed, muddy and of course pixelated terrains that left me feeling as if 2K Marin had either run out of space on disk or simply didn't care to apply more care to this final details that would have made a lot of difference in quality on the final product.

A few other things that I had noticed was the games inability at times to keep a steady frame rate that left me gritting my teeth when in high combat situations while trying to roll out of enemy range, get near cover, and or run for a nearby building or overhead so that safety was gained. Let’s also not forget the games lack of truly giving players a broad range of weapons to choose from. Sure the ability to find enemy variations of human weapons was nice, however it would have been more interesting to see modifications to these weapons, and ultimately the ability to explore optimization abilities giving weapons a broad reach for variations of combat situations.

When it comes to an overall standpoint, The Bureau XCom Declassified is a unique experience that stands out among tactical third person shooters, allowing them to have an interesting spin on what games such as Gears of War set the par for. With it players will get to explore a unique timeline, in-depth background story building, and of course a complete mind mess that unfolds as the story progresses. This game is truly a diamond in the rough that many players will appreciate, and should take an exploration of when the chance is possible.


Graphics: Beautiful from afar, but when it comes to up close, some character models as well as terrains are muddy that causes the experience to be taken away rather quickly.

Sound: From the well orchestrated score, soundtrack, and of course voice acting; The Bureau delivers an authentic 1960's feel that is to be a truly authentic feel to it.

Controls: Thanks to the games rather familiar Third Person Shooter play style, The Bureau is easily to learn and will not disappoint many as some TPS clones have. However, the action and ability wheel will take some time for players to adjust to.

Official Website: The Bureau Game
Posted by Unknown at 6:44 PM