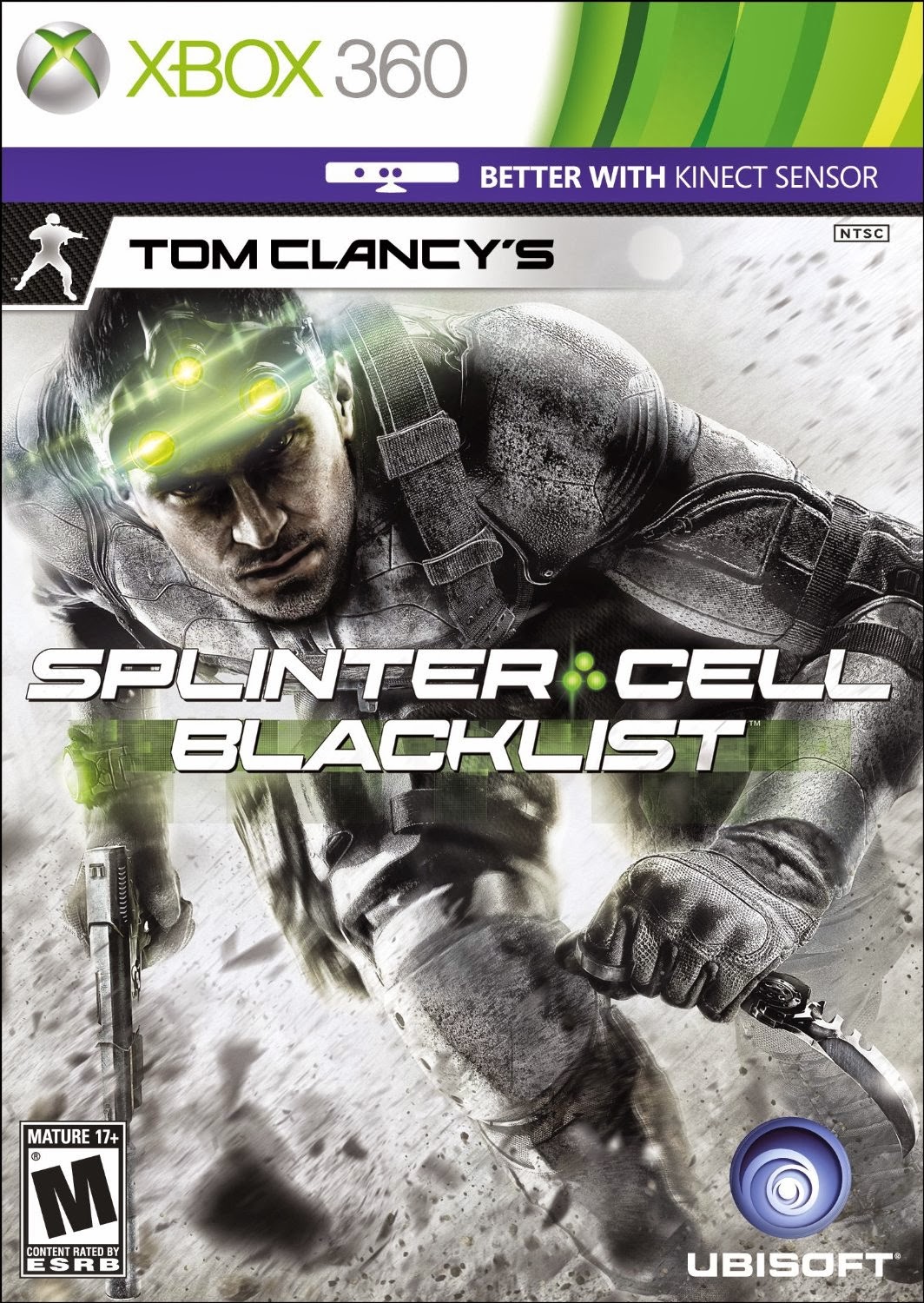 Final Opinion: When it comes to Tom Clancy's Splinter Cell, I'm no stranger to the interesting take on Stealth and Espionage, instead I'm leaned into the favoritism of the series, but still find a few drawbacks that would force me to replay Conviction and the co-op over touching the multiplayer on this game again. However, the 4E missions do help unlock gear and equipment for multiplayer, which in turn gives an awesome set up that could make you possibly unstoppable. For Splinter Cell this is an entry that could change the face of Splinter Cell forever, for the better, and that's saying a lot. For those of you familiar with this series, this is a must, and we hope you enjoy it as much as I did. 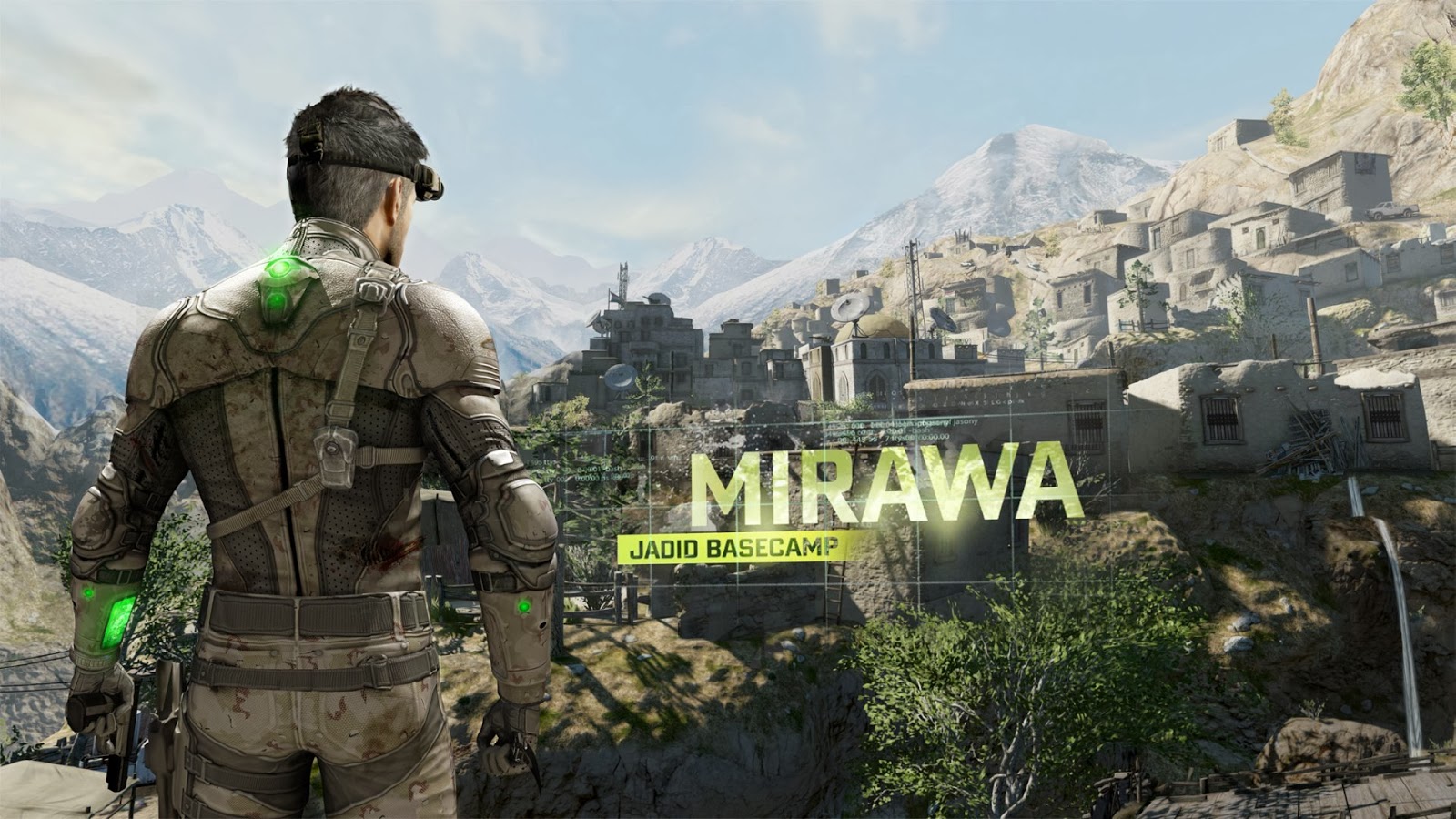 When it comes to Splinter Cell titles, I can say I'm a veteran to the series, a fan that knows the series almost inside out with a few hiccups, I've not read the books as of late. When it comes down to it though, the books are more of side stories that will help understand the back stories, this isn't so. When it comes to Splinter Cell Blacklist, the adventure was more than interesting to begin with, from the opening of seeing Sam Fisher and his team being activated by the president, only to see Sam and his response to the changes that are occurring as the unknown enemies begin their reign of terror. As the game-play went through, I was able to adjust to the awkward controls that changed heavily from Conviction to Blacklist. First of all lets start there. For players unfamiliar with the games schemes, LR or L1 can be held down in order to select weapons, devices, and of course change the type of items to be used. For those familiar with basic third person shooters and first person shooters will find themselves using the basic scheme, which is very fitting, once attuned to it. Players will find themselves however trying to use A to try and hit cover so they can hold onto it, while others will adjust quickly to using a to run, jump or crawl into walls, bridges, etc. Others will find themselves having to learn a control scheme they aren't used to, whilst some will very quickly adapt to hitting the "B" on XBox 360 or PS3 users will find themselves adjusting to clicking "O". The basic jist of it is, these controls no matter what will take time, and for some this could be an issue, trust me on this.

When it comes to story, everyone that knows Tom Clancy is not going to be let down, the story behind Splinter Cell Blacklist will of course once more set players into a world unlike any other, fighting against a terror threat unlike any other. The problem is not in the main story, instead I found myself growing frustrated with how the side missions actually tie into your progress of story. For example, when I decided to use SMI to explore the mission options I was given the chance to actually directly load into the mission with a briefing, where as if players are wanting a bit of story to it, they will need to hunt down interactive personnel on the Paladin and talk with each of the ships "residents" for a full scoop of the story behind the missions. For full stealth missions, players will need to speak to Grim, she'll handle these. For the all out hunt and kill, Briggs is your man, these missions can rise in difficulty unexpectedly. For the rest you will speak with Charlie and Cobin, each of them will provide mission details, and even a bit of insight to the story. Since I want to leave this spoiler free, lets just say these are recommended, preferably solo as most co-op partners do not communicate based on my experience - this provided a troublesome experience. 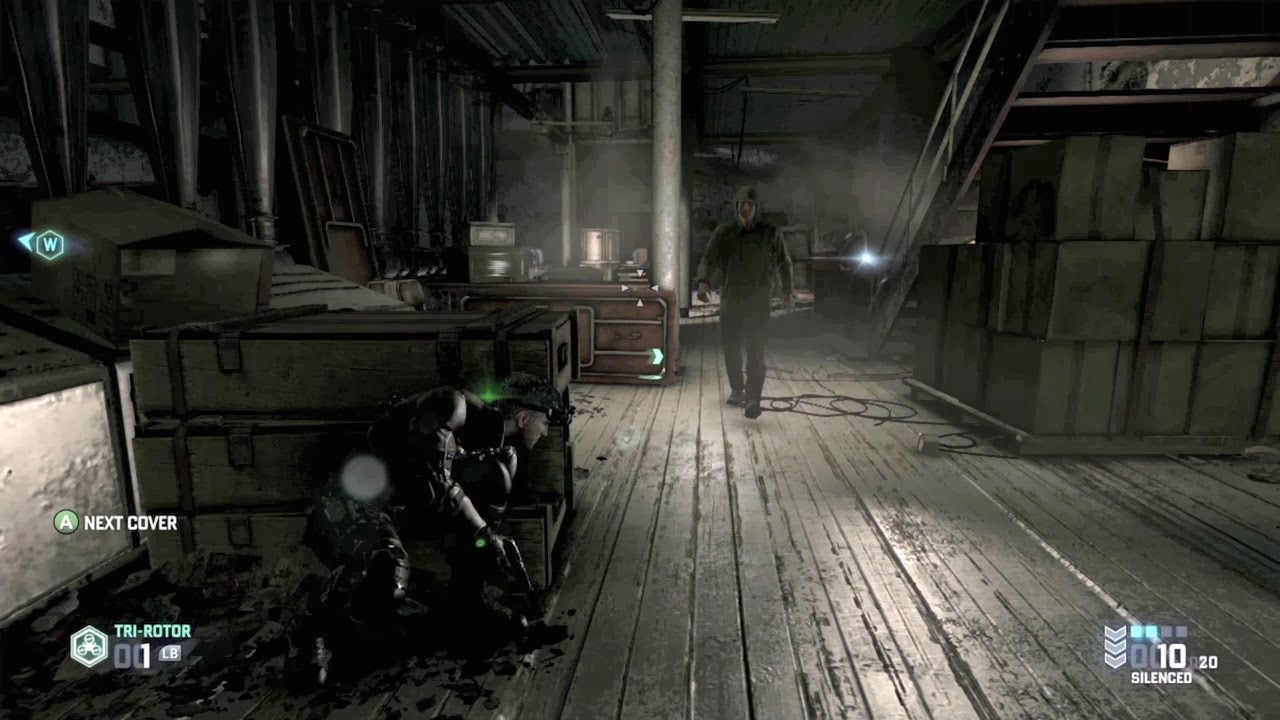 When it comes to multiplayer, Spys vs Mercs was very well known and still is, however with only 3v3 I felt a bit disappointed by as the game felt as if the team sizes could have been increased, but in ways it was fitting. When it comes to this players will be somewhat acquainted to the first person aspect of a Mercs trooper, which evolves around first person, listening and looking for enemies, while also protecting three points that the spies are looking to assault. These points are intel, ones that can not be replenished once taken, but if the hack is stopped can cause the enemy team to have to start over, only IF the mercenary team stops the progress. This can be hard as some of the spy players will use an active camouflage type ability, which will make them extremely hard to see, and extremely deadly if being hunted. Caution is suggested when playing the multiplayer, even though time is of the essence, it's something that should be considered for both teams. If you intend on playing the multiplayer, note that players that have unlocked more gear, will have a step up on you, and will use this to their advantage. However, it is still fun and should be taken as a good break from the campaign. After receiving tokens, players should note they can customize a class for Merc or Spy. Choose carefully as these have to be unlocked one at a time per faction.

With this review I hate saying it is limited as much of it would be filled with spoilers, but I'd like to touch up on a few things. When it comes to the game I did encounter a few bugs I found frustrating, causing me at times to stand up, walk off, and move on. One was simple. Enemy detection can be troublesome as enemies will gain the same equipment our hero Sam Fisher can, from infra-red goggles, to jam equipment via drones (no you can't get these), but also lets not forget to mention that enemies can also be just as deceiving as you. From heavies, to dogs, to cameras, enemies are out to kill you and find you in any way possible. This also leads to those of you who like to collect items. Those pesky dead drops can be found easily with upgrades to your Paladin base, as can Laptops. Each hold extra money, extra story, and of course rewards based on your discoveries. These items can be found in both story and 4E mission for all the four mission givers mentioned earlier. So be careful, stay stealthy, and do not be scared to use your small sticky cameras, sleeping gas, or your stun darts from your tri-rotor. All these will keep you safe, alive, and of course well. These pieces of intel are rare, so are HVT's (high value targts) that offer the same rewards, and information in different forms. Some of these can also help with understanding the story about the mysterious "Blacklist". 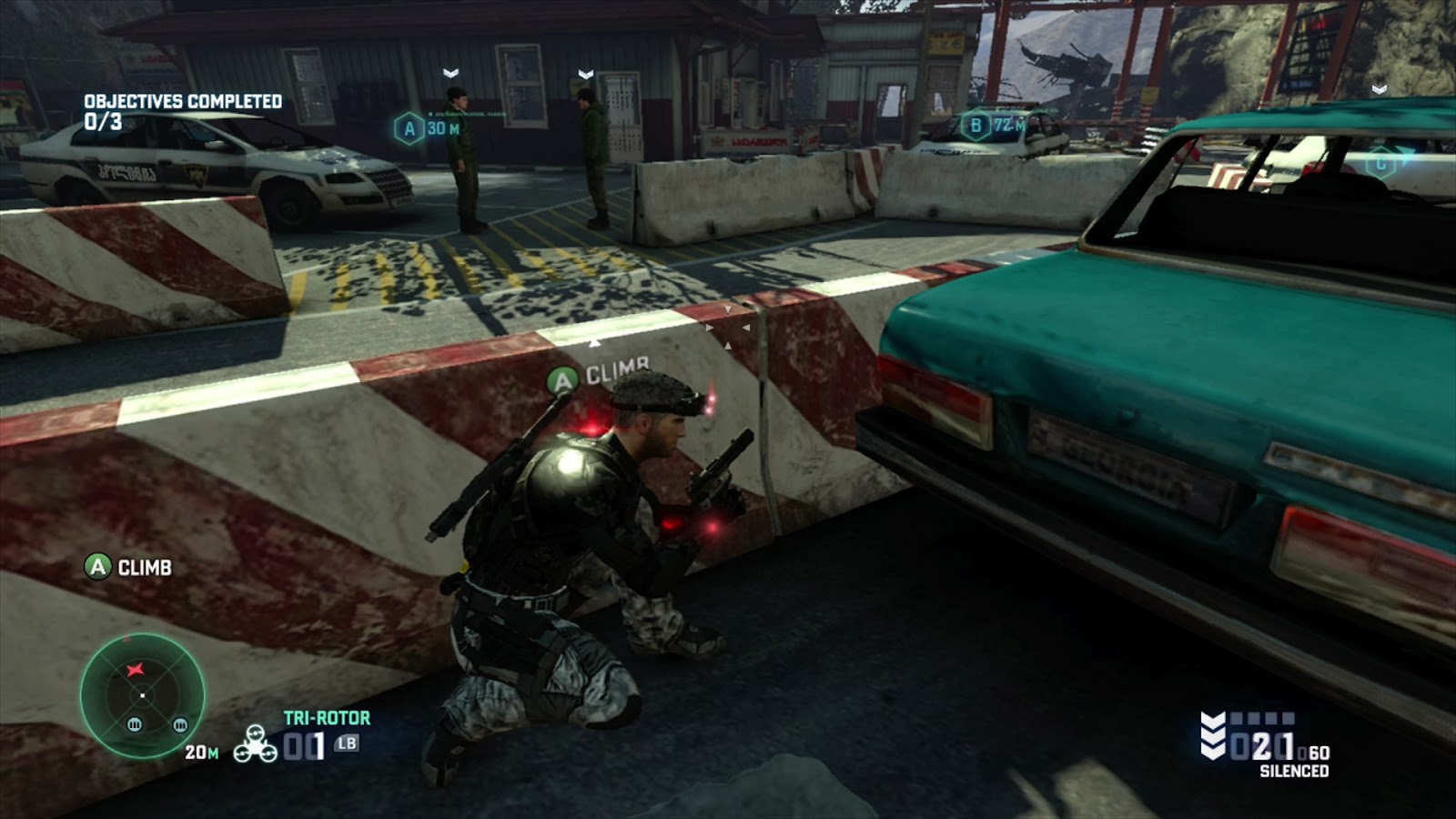 When it comes to Splinter Cell fans, this game is a must. It offers plenty of intel, an in-depth story, and also a very cinematic setting that will make players feel as if they are playing a game, watching a high budget movie, while also reading a Tom Clancy Novel. For those simply wanting a new game, this one is easy to pick up, move on with, and will not spoil past titles, but will lead to questioning some of the back-story from past entries. This is a must own for any Tom Clancy or Splinter Cell fan. Sadly this will be the final one written by the now deceased Tom Clancy, who passed away at the age of 66. Our thoughts and prayers with his family and friends.

Graphics: Normally with Splinter Cell titles, I've never cared about graphics, they are something that simply doesn't matter when it comes to Tom Clancy stories. Much like Splinter Cell Conviction, Blacklist offers a beautiful display of graphics, animations, and of course cut scenes. From this game I can truly say, anyone wanting to mess with lighting, shadow effects, they must get their hands on this game and take a peak at what was done right in this game.

Sound: Amazingly realistic, the game sets you down, throws you into a cinema like experience thanks to the HD sound files in the games installs. Even the voice acting is superb, making players feel as if their surround sound is truly worth the money, for those who do not have one, the surround sound settings can be edited in the sound menu. We suggest though playing the game with a set of gaming headphones and this is because of the amazingly orchestrated soundtrack, well crafted gunshots, explosions, and of course chatter players can hear rather well without having to worry about waking up neighbors.

Controls: Unfortunately these were hard to learn, leaving a bit of frustration even when over half way through my play through of this title. I hope they eventually tie wall covering into the "A" or "X" buttons (XBox/PS3) so that players aren't running across cover and dying.