Final hours of Mighty No. 9 Kickstarter

Mighty No. 9 Breaks Goals for Next-Gen and Handheld Launches!
Originally Published and Copyrighted by Blast Away the Game Review on 10/1/2013
Written by Dustin Murphy 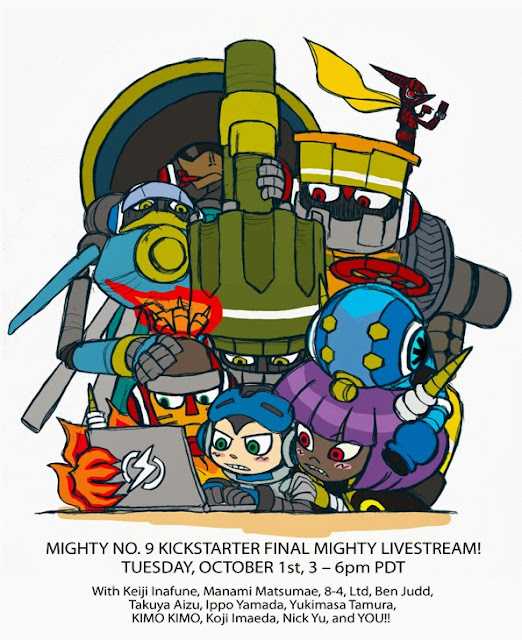 When it comes to breaking records, the team at Comcept, headed by Keiji Inafune, has been breaking massive records. So far the title has broken the 3.5 million USD in crowd-funding in order to make this game possible. For those of you who haven't assisted in this project and are interested, there's only roughly four hours remaining, and that's not a lot of time. However, what this does mean is you can still pitch in by getting ready to purchase the game when it releases sometime in 2015, which in gaming time, is not far away.

When it comes to all this we are glad to say here at Blast Away the Game Review, is that Mega Man himself is back, but with a new paint job and appearance change. This alone is great news, for retro-game fans like ourselves, and fans interested in a side-scrolling, blaster filled, machine exploding, frenzy filled, love affair. With all hopes held high, all we can say is, keep up the good work fans, developers at Comcept, and of course Mr. Inafune-san himself! We are keeping all eyes on you to see how this goes and eagerly await the launch itself.

For those interested as stated yesterday there are special events going on today from developer Q&A for backers, in the final hours of the Kickstarter, running on Tuesday, October the 1st, from 3pm to 6pm PDT, including team interviews, live backer Q & A and of course, a special guest, Inafune himself announcing the winners of the our Call heroine design vote! Of course directly from the team here's a thank you from them!

Again from us here at Blast Away the Game Review to the members of Mighty No. 9's team, we want to say congratulations, good work, and we look forward to seeing what the future has in-store for you all at Comcept.