XSeed's, Valhalla Knights 3 Out Now!
Originally Published and Copyrighted by Blast Away the Game Review on 10/15/2013
Written by Dustin Murphy 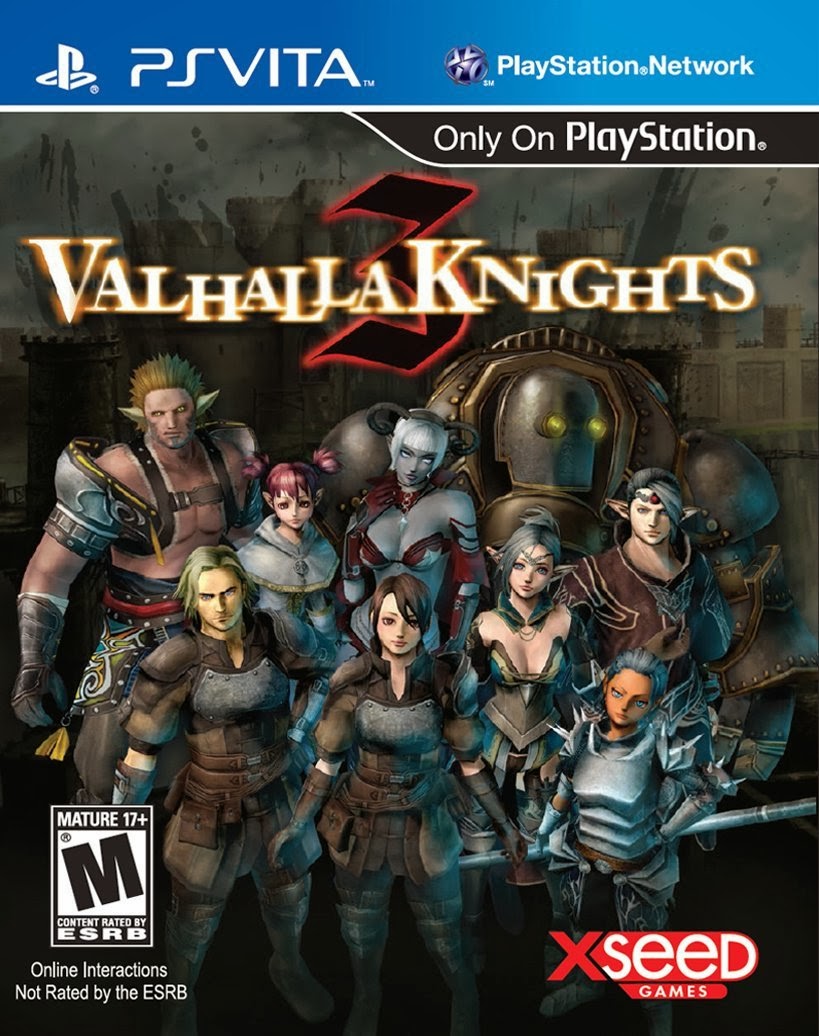 Earlier today from Torrance, California, XSeed Games, the independent-minded publishing brand of Marvelous USA, is excited to announce that their latest installment of the medieval action RPG series, Valhalla Knights 3, has shipped to North American Retailers, and has released exclusively on the PlayStation®Vita handheld entertainment system at an MSRP of $39.99. This latest title from them is available as both Physical and Digital allowing players to obtain it in the easiest ways necessary to them. The European release for PAL territories has also been confirmed for October 23, 2013 for launch and will be priced at £24.99 and €29.99. To celebrate, XSEED Games has made the original title in the Valhalla Knights series available free of charge on the PlayStation Store through October 21st for all North American PlayStation®Network users.

“Valhalla Knights 3 is one of the toughest games in our portfolio,” said Ken Berry, Executive Vice President of XSEED Games. “Players are going to be seriously challenged and have fun with this one, which is why we felt it was necessary to incorporate the online features and leaderboard system. We’re also very pleased to bring the game to fans in Europe, especially so close to the North America launch.”

Valhalla Knights 3 forces players to carry out the criminal underground’s dirty work as they search for a long-lost legendary treasure in an immoral world, where the only way to survive is to fulfill quests against their heroic nature in the medieval prison Carceron. Players will begin by creating a fully customizable main character and allied party members, choosing from one of seven races, including Human, Dwarf, Elf, Halfling, Machine, Beast and Nightmare, and from one of up to seven basic job classes such as Fighter, Mage, Thief and Priest, with up to 20 total job classes unlockable or accessible as downloadable content.

Morality is not the only challenge players will face in Valhalla Knights 3 - on their journey, players will engage in nonstop action-heavy real-time battle, utilizing their customized party of up to seven characters. Players control any one party member at a time, and can choose to either issue commands to their allies or switch characters on the fly and take command themselves. With 200-plus quests and over 500 in-game items, weapons, armor and special goods, Valhalla Knights 3 promises players over 40 hours of basic gameplay, with many more for the completionists. For those who want to go beyond the single-player campaign, XSEED Games has added online connectivity on top of the game’s original ad-hoc two-player versus mode for its North American and European release, so fans can play against each other online no matter how far apart they are.

About Marvelous USA:
Marvelous USA, Inc. is the US-based publishing operation of MarvelousAQL Inc., overseeing its two North American divisions. XSEED Games, its brand and division for unique and innovative console, PC and handheld games, has been in operation since 2004. Marvelous Online, the company’s brand dedicated to mobile and online social games, is an expansion of XSEED’s mobile team thanks to acquisitions by Marvelous USA. Marvelous USA is a 100% wholly-owned subsidiary of Tokyo-based MarvelousAQL Inc., a publicly-traded company listed on the Tokyo Stock Exchange. More information on Marvelous USA can be found at www.marvelous-usa.com, and XSEED Games can be found at http://www.xseedgames.com.