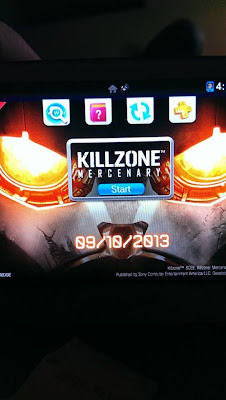 Authors note: Due to the NDA I will not be posting my personal screen shots, only those made available to the community, but lets say it this way. It is VERY well worth the money. PS Plus members can download it now as well for the Public Beta.

A few days ago I was greeted with an email stating that I was invited to the Killzone Mercenary PS Vita Beta, which is amazing, and so is it. In Killzone Mercenary's time of downloading to my PS Vita it was a roughly fifteen minute download to the immense 1gb size for a beta, but the wait on it came well deserving. Killzone Mercenary once booted up began to send me into a state of sheer excitement as the music began to play, queuing the memorable songs from the original series as the score played, only to also display to me a touch screen based start up.


In the menu I was greeted with the options to play the single-player (unavailable), multiplayer, options and of course other menu items that are present. With it being a multiplayer I jumped straight to the menu where I it popped up touch screen boxes reading start match, join friend, arms dealer, and party match. Instead of going straight into combat I opted to try out the arms dealer "Black Jack" where I found I could not purchase equipment without first having played the beta. Luckily there was some information available regarding unlocks. Loadout slows become available at Lance Corporal II, Sergeant I, Lieutenant III, and Liutenant Colonel I. This allows players to build multiple classes to make themselves the perfect killer. It is unknown whether or not these classes will also work in campaign for myself yet, but will let you all known. In the set up players can purchase a new set up. For me being I like precision and snipers I opted for the 6000 valor cost armor the "Infiltrator" so that I could have low movement volumes, quicker speed, and unfortunately gave up a lot of defensive capabilities due to this. For silence based weapons I went with the "M66" while it was on a "promotional sale" at 20% reduced Valor, putting it at 4080 valor. Luckily it's silenced, burst fire, and of course uses standard ammo. It also featured a enhanced green dot scope giving me a bit of an edge on aiming capabilities. For my pistol I stayed with the default silenced "STA-18SE", which did everything I needed, and some. As for grenades? Being a sniper and going for stealth I went with the "VC-G11 GAS" grenades that release a deadly cloud of poisonous gas that made areas off limits for a short time.


After having gone through the customization it was time to head into the only available game mode, Warzone. Warzone is much like Call of Duty's Ground War, in it players of both forces are given the same objectives to fight over. In this one we are given the following:

Luckily with it being a Vita game transitioned from its console predecessors, Killzone Mercenary's has defined what HD games should look like, and that the PS Vita can give us a console-like experience. In Killzone Mercenary, players will be introduced to a double tap back screen based sprint or they can simply push circle while moving, to crouch just push circle while not moving. Of course the cover system transitioned as did the aiming system. To assist with not having as much of a aiming system like the PS3, the PS Vita version allows for motion sense based aiming assist, which is very welcomed and useful. Players like in the originals can unlock kill streaks that can be accessed by tapping the touch screen above the mini map as seen in the screen shot above. To use grenades players can tap the grenade symbol that sits below the switch weapon command or simply tap triangle to switch guns, and hopefully double tap triangle to switch to pistol. Overall, Killzone Mercenary has left a strong sense of the originals imprinted on it giving it a true Killzone feel as well as the authenticity that makes Killzone unique.

With this title Guerilla Games delivers a true Killzone experience from graphics, game play, and of course the focus of everything Killzone into this little hand held that will deliver a very unique, and amazing experience that PS Vita owners should be excited for come September 10th, 2013.
With PS Vita's being a new solid price of 199.99 USD as well as Killzone being 39.99 USD this title is a must that every PS Vita owner should have new or old to the Killzone Franchise. To follow up Killzone Mercenary will tie into the Killzone Shadowfall storyline, and players hopefully can find something unique in Killzone Shadowfall, which launches on 11/15/2013 side by side with the PlayStation 4.
Posted by Unknown at 7:50 PM