Saints Row The Third - The Most Ludicrous Purple Bat To Date.
Originaly Posted and Copy Righted by Blast Away the Game Review on 8/12/13 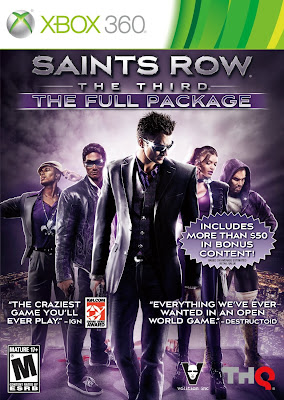 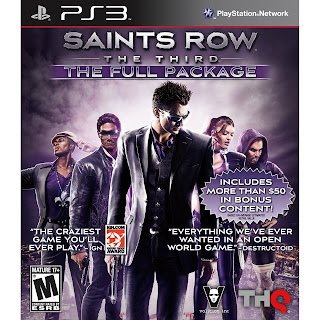 Cons:
-Nudity blur that makes the characters look like pixels till clothed
(sounds stupid, but other games got away with a online "adult only" pass).
-Graphic glitches and sound glitches at times can be annoying
-DLC is short giving the game a bit of a lackluster factor.
-Inconclusive death of one character leaves players dumbfounded

Saints Row has been a franchise known for its stupidly hilarious jokes as well as the quick slap stick humor. In Saints Row the Third players will once again take the reigns as a leader of the 3rd Street Saints leader. Your goal? Dominate Steelport and seek to dominate it just as they did Stilwater. The game takes place a time after the fall of the Ultor Corporation who you might see as the most annoying and idiotic corporation ever made. Shortly after the 3rd Street Saints have turned their street gang into a media empire and icons to the world. In the start of it we get to see our team with actor Josh Birk who wants to play a Saint's team member, and well foolishly he joins them in the middle of their new daily business - bank heists. Birk having set off the alarm brings the entire Stilwater P.D down on them in a true warfare scale firefight and at the end of the day our team ends up in jail. During their time in jail their second-in-command (next to the players character) Johnny Gat decides that he has come to a term to express his discontent with the Saint's as they have strayed from who they really were and that they ignore their roots as a group. Players in the scenes will see a group called the Syndicate decide to bribe the police to release the Boss, Gat, and Shaundi out of jail sot hat they themselves can bring forth their own idea of justice and of course try to get his money back while on his private jet. As the scene takes place we also see the Saint's fight their way out and end up with Johnny Gat being shot. With the escape players are witness to an aerial fight like never before that ends with them landing in Steelport and all it's glory for the taking.

The title came to me quickly with its cartoon looking characters, slapstick humor, and of course it's focus on their adult gamer's. Saints Row the Third came around as a breath of fresh air in a Grand Theft Auto heavy world that seems to be cramping the Sand Box genre for the modern day. Let alone a break away from a great series like Assassin's Creed, which is in by no means a comparison that should be made. From the music and voice overs the game is by far hilarious thanks to its wise cracking writers as well as voice actors giving this game a true adult feel to it. In it we play as "Boss" the leader of the 3rd Street Saints who has become hellbent on taking over Steelport just as they did Stilwater and of course overall screwing over the Syndicate for having killed Johnny. Luckily in this title there has been a vast majority of improvements from graphics, voice overs, music selection, assisting AI partners, and of course the awesome ability of calling in vehicles including air ships. The game also features an incredible set up of imagination from tributes to Tron all the way to the silliness of games such as Halo and Duke Nukem only to really punch at the thirties era science fiction movies. Thankfully this game's controls were easier than Saints Row 2's giving players an easy to use grasp of the game as well as the inherit ability to change the set up to their liking with some limitations of course. The most frustrating part at times can be piloting and driving vehicles - giving it a clunky and at times downright annoying scheme. However, the game makes up for this with the wacky missions, commentary, and of course your character if blowing up a vehicle wobbling around like a rag doll for a good laugh.

Saints Row the Third however does not escape the same problem most sandbox titles have and that is most noticeably an issue with the enemy AI at times become troubling, annoying, and down right making players rage quit from sheer aggravation. It is most noticeable when driving around and "accidentally" running over a pedestrian, cop, and or a gang member from the Syndicate. Players will find themselves quickly and regretfully running for the nearest building they own, which does not always work and will end up with them dying. Saints Row the Third also finds itself getting criticism from adult gamer's due to the nudity blur during character creation making it at times difficult to place clothing items, tattoo's and of course some of the women's garments on them. Most noticeable is when the characters are in skirts (yes I've seen this happen with a character in a kilt, my eyes still burn) or kilts and the blur pops up due to a graphic layering issue. This can easily be ignored as long as player's don't mind the blocked pixels showing up. A few players have even requested a "censor" removal with a age check at log-in or at least a DLC that can only be enabled by gamer's above the age of eighteen.

Another downfall for this title is the DLC, which can be bought separately or as an entirety with the Saints Row the Third Full Package edition. The DLC took a co-op time period of roughly an hour between the lot of them giving myself and my co-op partner a bit of a frustrating time due to the cost of each DLC. Though with the DLC came a complimentary set of new side missions as well as set ups for Mr. Genki and his wacky in-game show called Genki Bowl that of course will be seen multiple times through out the games entire grandeur. Over all the complaints about this game are few, and by few we mean almost none. Purple floppy bats that represent an adult toy, what else could go wrong?

Graphics: Colorful, bright, and highly adapted to have a serious however cartoon like look to it..

Sound: Great soundtrack and voice overs that seem to at times get cut out due to either sound glitches or bad code editing.

Controls: Very easy to learn however vehicle controls will make some gamers throw a controller into their wall near by.

Final Verdict: Hilarious, immature, and overall set for adults above the age of eighteen.

Cost: Available now for PS3, PC, and XBox 360 we suggest the Full Package Edition which will run most gamer's between 29.99 and 39.99 USD at most major retailers online or off.
Posted by Unknown at 2:05 PM